A Surfeit of Lampreys, session #1

So Wednesday night I started a new campaign set in the pseudo-historical Wessex milieu I've been blogging about for a while.  Two weeks ago the PCs in my Encounter Critical/Star Wars game blew up the all the bad guys and I completely forgot to blog about it.  Either way, that session seemed to get the EC/retro-Star Wars thing out of my system and I was ready to go back to D&D. 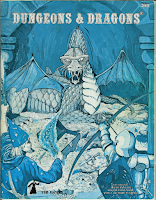 And I really do mean Dungeons & Dragons.  Not Labyrinth Lord or Swords & Wizardry or any other late model retro-clone game, as cool as they are.  So I broke out the Blessed Blue Book of Holmes the Physician and used that as the basis for the new game.  I chose the Holmes version for a variety of reasons.  It's short.  The lack of information for play above 3rd level gives me a void I can fill with whatever suits my fancy.  It's got a lot of interesting rough edges.  It was near at hand when it occurred to me earlier in the week that I really needed to figure out what rules I wanted to use.  Etc., etc.  But I think the main motive was the simple fact that I have never run a Holmes game.  I started with the later Moldvay Basic rules and played pretty much every edition since (excepting 2.5 and the new Essentials rules).  And I've run a few OD&D games.  But Holmes was a hole in my experience of the game.  And like I said, hey, here's the rulebook right on the computer desk, so why the heck not?
But I can't run the rules exactly as written.  That would be too straightforward and clearly not in the spirit of what I'm shooting for setting-wise.  So I cut some stuff.  No non-humans, at least until I have my changeling race rules worked out.  Platemail and several weapons are eliminated as inappropriate to the period.  There's a bit of a debate about whether longbows are actually a factor yet.  I don't think they were but I'm not confident on the point so I rule that we will be using a single weapon styled the Bow, Undefined.  Clerics are cut, all the cleric spells are merged into the MU list and Turn Undead also becomes an MU spell.  (Carl cites this decision as further proof that I simply hate the cleric class.)  I'm sticking with the OD&D xp rule of 100xp per hit die of foe overcome, rather than that pain-in-the-ass look-up chart.  The draft magic rules and consolation prize weapon rules are provisionally adopted.  My carousing rules will probably be used at some point, though I think I may revise them a bit.
I let each of the five players make 2 PCs a piece, to ease my conscience a bit when they start dropping like flies.  Here's the initial party.
Pierre (T)
Captain Wimpy the Klutz (MU)
Skaldagrimm (F)
Grimmson (T)
Bodger Evans (T)
Gimpy Evans (T)
Fred the Mediocre (MU)
John Smith (F)
Ermlaf the Saracen (MU)
Jean Claude (F)

Grimmson is Skaldagrimm's son.  Skaldagrimm tried to raise him up as a warrior but it just didn't quite take.  Bodger and Gimpy are brothers and Welshmen who got the heck out of Wales when the uprising against the Normans went pearshaped.  Thieves by trade, their cover is that they are mercenary archers.  Ermlaf is an Anglo-Saxon named found by opening up my copy of Beowulf to a random page.  That's not his real name, but all his English friends can't pronounce it right so they started calling him Ermlaf instead.

Here's the initial overland map I put in front of the group. 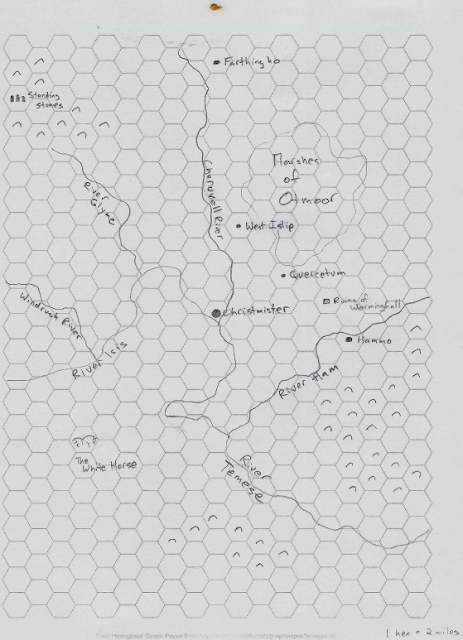 I explain that the group is holed up in the village of Hammo.  It's the Feast of St. Alban, June 22nd, 1139.  Empress Matilda, Queen of the Romans, recently landed forces in an attempt to overthrow King Stephen.﻿  No one in the party wants a piece of that action, I explain.  Rather, they plan on using the general panic in the countryside to cover their plundering of the ruins of Worminghall, a fortress that centuries ago served as the headquarters for a minor local king.  Skaldagrimm is particularly seeking Tailbiter, an ancient magic sword owned by one of the lords of Worminghall.  Another PC owes Jabba the Hutt 10,000gp, but I don't recall who it was.  That's the sort of thing that happens to you if you ask my opinion as to why your PC is crazy enough to go down into a dark, dangerous dungeon. 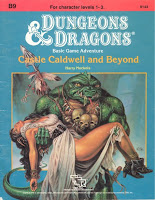 Worminghall is one of those ruined pile sort of affairs.  The top level uses the map from  TSR's 1985 non-classic Castle Caldwell and Beyond, a module that I've run at least once but never particularly liked.  The map is not particularly inspiring, but works just fine as the ground level of a dungeon.  I'm pretty sure I was working off a cleaned-up scan of the map posted a while back by ze bulette of Dungeons and Digressions.  Most of the grunt work of stocking the level was done using the incredibly awesome Dizzy Dragon dungeon generator.  I also used the Dizzy Dragon to rough out the first few levels of the dungeons below the castle.  Random dungeons are a lot of fun and it really doesn't take much work to breathe a little life into them.  For example, I decided the wolves were made of smoke and the Trader in the first room of level one is a clockwork robot.  It only takes a few touches like that to turn generic random results into something memorable.

The party only explored a few rooms, as can be expected from the first expedition of the first session of a new campaign.  Important facts the party discovered:
Loot was pretty meager as well.  I think they collected 54gp total and Fred the Mediocre wound up with a runestone that has some sort of lightning magic.  So far all he has been able to do with it is zap himself, but maybe next session he'll be able to zap an opponent instead.