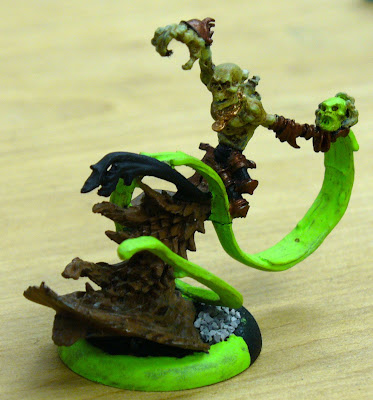 I've been running games at the Armored Gopher since January and this whole time I have been eagerly awaiting some player to ask "Can I play X?", where X is not one of the classes/races/whatever in the rulebook. Last night I got my wish. One of the first things I heard as I entered the store was "I wanna play a lich." Joe was apparently ready to set aside his mutant with three brains in favor of something a little different. So he rolls 3d6 six times while I figured out how we would put a lich into the Mutant Future.

I end up offering Joe two options. The first implementation would be a gaunt Mutant Humanoid with half his physical mutations traded in for mental mutations. The mental mutations would be his "magic powers" and he'd effectively be a member of the Pseudo-Undead, like in the 1st edition Monster Manual II. The second possible method would be to start with the Labyrinth Lord version of the Magic-User, starting level set by a 2d4 roll but at 0xp and he would get Mutant Future hit points (a number of d6's equal to his Con). Other Undead abilities such as not needing to breathe would be adjudicated on the fly. I explicitly warned Joe that whether poison would work on this version would be a function of how dickish I was feeling whenever the situation arose.

Joe chose option two, so we now have a full-blown cadaver with a spellbook in the party. While I didn't add anything supernatural to this week's session, the kid gloves are officially off in this campaign. Balrogs wielding lightsabres and robots with magic rune casemods are now on the field of play.