In January 3025 the Draconis Combine staged a series of raids into the Moseby Sector to test the defenses of the Lyran Commonwealth. Combine High Command assigned the task of raiding Lyran space to the 11th Legion of Vega, known as “The Looters”. It was felt that the known unreliability and poor morale of the 11th Legion would help supply the Combine with plausible deniability; any captured forces could be explained away as rogue elements engaged in unauthorized plundering.

These raids would be the first time the 11th Legion of Vega would be commanded by Colonel Theodore Kurita, heir apparent to the Combine throne. Two initial attacks on 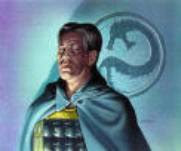 Lyran backwater worlds met with minimal resistance. Enemy battlemechs weren’t encountered until the third week of raiding, while a single company of the 11th Vegan was plundering the water purification plant belonging to a small colony on Messick IV.

Bad intelligence had led Colonel Kurita to believe that the enemy forces on Messick IV would consist of nothing but a few platoons of light tank and infantry, easily swept aside by his superior battlemechs. To his surprise the 22nd Skye Rangers were deployed on Messick IV for desert maneuver training. The 22nd Skye were nicknamed “Katrina’s Bonnie

Bairns” because this green regiment had been formed only a few years earlier on the authorization of Katrina Steiner, Archon of the Lyran Commonwealth.

Though untested in battle, the troops of the 22nd Skye Rangers were eager to prove themselves to their matron. The 22nd also had the benefit of several veteran officers leading the young mechwarriors, especially their commanding officer, Colonel Ivan Petroff, who had proven himself in several battles of the 3rd Succession War.

As the scenario begins both side’s main forces are pinned down in an intense firefight within sight of the Messick IV water purification facility. Both company commanders have dispatched reserve lances with the intention of flanking the main enemy force and setting up a deadly crossfire. The two reserve lances meet half a kilometer from the main battle. Whichever lance wins this exchange may very well be able to turn the tide of the whole engagement. The lance with the most tonnage of mechs capable of both movement and weapons fire at the end of ten turns wins the battle. 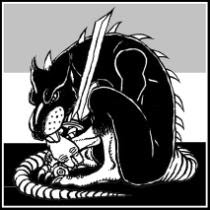 Pilot: Lieutenant Benjiro Akita
Despite coming from an influential and honorable mechwarrior line, Lt. Akita’s career so far has been a succession of dismal failures. When he flunked out of the prestigious Sun Zhang MechWarrior Academy his family was able to use its political clout to secure him a commission with the 9th Pesht Regulars. After a sub par tour with the 9th Pesht, Lt. Akita accepted an assignment with the 11th Legion of Vega because they were the only Draconis unit that would take him. He is desperate to prove himself on the field of battle in order to regain some of his lost dignity and earn the respect of his family.

Vehicle: MAD-3R Marauder
Considered one of the best BattleMechs ever designed, the 75-ton Marauder is equipped with substantial armor and numerous heat sinks. Armament consists of two particle cannons and two medium lasers as well as a torso mounted autocannon. The speed of this vehicle meets or exceeds that of most mechs in or above its weight class.

Pilot: Sergeant Monty Diggs
Sgt. Diggs formerly commanded a lance as a lieutenant in the 13th Rasalhague Regulars but he was inadvertently caught up in a political scandal when his commanding officer ran afoul of the ISF (the Draconis Combine secret police). In order to avoid a courtmartial Sgt. Diggs accepted a demotion and transfer to the 11th Legion. He now seeks to once again command his own lance.

Vehicle: CRD-3R Crusader
The Crusader is a 65-ton Mech that relies primarily on missiles in combat: two shoulder-mounted long-range missile launchers and two hip-mounted short-range missile launchers. Secondary weapons are wrist mounted medium lasers and machine guns. Cruising speed and armor are typical for a Mech of this weight class. Limited missile storage capacity can be a problem for this vehicle in a protracted firefight. 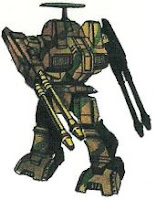 Pilot: MechWarrior Kareem Rodrigues
Kareem Rodrigues first tour of duty was with the 2nd Arkab Legion, the force based out of his native Arkab Sector. Rodriques is a devout Zensunni but the majority of Arkabites are members of the Azami faith. Rodriques requested a transfer upon discovering that he would have to convert if he ever wanted to seek promotion in the 2nd Arkab. Because the Arkabites are considered politically suspect he could only find a post with the disreputable Legion of Vega.

Vehicle: RFL-3N Rifleman
This workhorse 60-ton mech is armed with two large lasers, two autocannon, and two medium lasers. Owing to the massive cannon, speed is slower and armor thinner than many mechs in the same weight class. Heat sinks are insufficient in the event that the pilot fires both large lasers simultaneously.

MechWarrior Erma Langley is one of the rare female mechwarriors in the service of the Draconis Combine. Her comrades-in-arms have nickname her “Jinxo” for her apparent ability to find herself on the losing side in conflicts. Prior to be shanghaied into the 11th Legion of Vega, Langely served in two different mercenary units that were both blasted out of existence on different fields of battle. The second time this happened she found herself deep in Draconis territory, where she was offered the choice of signing on with the Legion or becoming a prisoner of war. She is determined to demonstrate that she is not the jinx many think her to be.

Vehicle: WSP-1A Wasp
This 20-ton scout mech is noted for its high speed and good jump capability. Lightly armored and armed with only a medium laser and a small missile launcher, this mech is not designed to engage heavier units in face-to-face combat.

Pilot: Lieutenant Waldo Barr
Young Lt. Barr is a recent graduate of the BlackJack School of Conflict, a relatively new mechwarrior academy that has produced many capable pilots but is looked down upon by the old boys of the Lyran High Command. Lt. Barr is eager to prove that the training he received at BlackJack is just as effective as the teachings of mechwarrior institutions with longer and more respected pedigrees.

Vehicle: TDR-5S Thunderbolt
Weighing in at 65 tons, the Thunderbolt is a heavy Mech with a beefy 13 tons of armor. Its primary weapons are an arm-mounted large laser and a torso-mounted long-range missile tube. This mech is also equipped with a variety of medium and short range weapon systems. The speed of this vehicle meets or exceeds that of most mechs in or above its weight class. 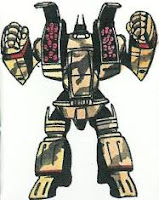 Pilot: Sergeant Trina Chapman
The Chapman family of the planet Skye has a long history of Lyran military service as aerospace fighter pilots. Trina is the first battlemech pilot to come from the Chapman family in three generations. Her hope is to show that the Chapmans make just as good mech pilots as they do aero-jockeys.

Vehicle: ARC-2R Archer
This heavily armored 70-ton battlemech is well known for its two large long-range missile launchers, capable of delivering a deadly volley of 40 missiles in a single salvo. Short ranged weaponry is limited to medium lasers, of which two are rear mounted.

Pilot: MechWarrior Donnell Cahill
Donnell Cahill comes from a long line Skye-born mechwarriors. He signed on to the newly-formed 22nd Skye Rangers in an attempt to get out from under the shadow of his two older brothers, who have already made names for themselves in the Cahill family’s traditional unit, the 2nd Royal Guards.

Vehicle: GRF-1N Griffin
This jump-capable 55-tonner possesses good speed and average armor for a mech of its mass. Weaponry consists of an arm-mounted particle cannon and a long-range missile drum. Unlike most other battlemechs this vehicle is not equipped with any short or medium range weaponry and must rely solely on brawling attacks when at close range.

Older than most green mechwarriors, Kay Mcintosh was given her battlemech as a reward for 15 years of loyal and exemplary service as a mech technician with the 17th Skye Rangers. Unfortunately the 17thSkye had no openings, so she took an assigment with the 22nd. Mcintosh looks for an opportunity to engage the enemy, as some pilots from long-established mechwarrior families have questioned if her piloting skills are as keen as her technical know-how.

Vehicle: LCT-1V Locust
The ground speed of this 20-ton scout vehicle exceeds that of almost every other known battlemech. Armor is no better than would be expected on such a small unit. Weaponry consists of a medium laser and arm-mounted machine guns. Unlike most scout mechs this vehicle is not jump-capable.

Map depicting the area where Akita’s Lance encountered Barr’s Lance. Akita’s Lance approaches from the west (left side), Barr’s from the east (right side). One hex equals 30 meters. 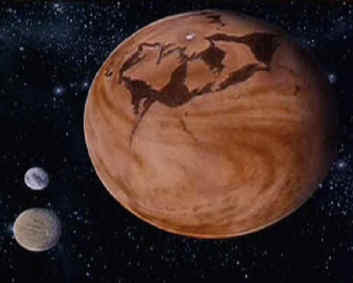 Messick IV as seen from space 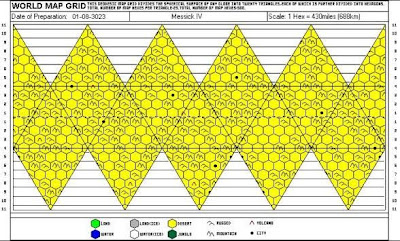