Here’s the sort of thing I have trouble passing up when I spot it in the bargain bin of a comic shop. 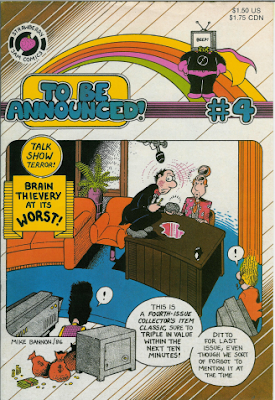 I don't know much more than To Be Announced was a black & white ‘humor’ comic published in Ontario. I want to like this book, but it’s not very good. However I really dig the mag’s mascot: 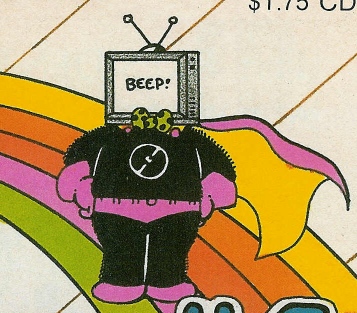 Yet another reason why I should never be made Emperor of the World (or Canadia): I would have a special prison set up for colorists who screw up rainbows that badly. Maybe if I was feeling particularly merciful on a given day I would allow the dude a chance to explain the artistic effect he was attempting to achieve with this brave new spectrum. But most of the time I would simply send such prismatic offenders to Bifrostcatraz where they would be made to write the mnemonic Roy G. Biv one zillion times on a chalkboard.

Anyway, here’s another pic of the unnamed mascot. I think I’ll call him the Cathode Gorilla. 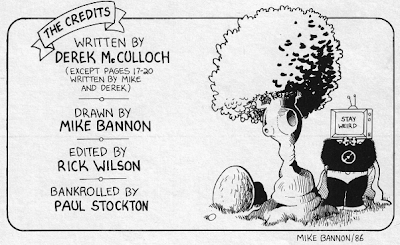 I like that tree, too. Comics.org says artist Mike Bannon also did later work on Oombah the Jungle Moon Man. Dig the trippy cover, man.

The not-quite-humurous back-up story is actually better written than the feature, though the art is a lot rougher. The plot could easily be swiped for a sci-fi game: tow intergalactic con men are selling bogus real estate deeds on two planets in the middle of the neutral zone. It turns out that the folks on the other side of the neutral zone have taken an interest in the world. Suddenly the local government needs the con men's dog & pony show to serve as evidence that their own claim to the two planets is stronger!