I don’t follow release schedules and product announcements with the same level of interest I had back when I was reading rpg.net regularly. I think my enthusiasm was curbed primarily by the realization that all the dates supplied by most publishers are selected by reading pig entrails and watching the flight of birds. Oh, and avidly following the Wraeththu rpg through the entire cycle from announcement to finished product probably didn’t help either. But there are a few items coming down the pipe that seem promising to me.

Swords & Wizardry: Whitebox – The original Swords & Wizardry is an Open Game License retro-clone of Original D&D plus the Supplementary material. The forthcoming Whitebox version of S&W is supposed to peels away the AD&Disms, reverting some of the subsystems that were ‘upgraded’ in the Supps. For some tastes this will be one step too far, a retrograde movement into territory originally abandoned for good reasons. Me, I just want an OGL version of the three little books that started it all. Not because OD&D is inherently superior to all those later edits, amendments, revisions, corrections, clarifications, misunderstandings, and manglings, but simply because OD&D is a fun game. By my lights Whitebox needs no further justification other than helping keep a fun game in circulation. That it also helps us stay in touch with our gaming heritage blah, blah, blah is just a bonus.

Hackmaster Basic – I’ve wanted a Hackmaster Basic rules since the game originally came out. I’m not particularly thrilled that it has taken an edition overall to get one published, but beggars can’t be choosers. HM Basic will be a relatively cheap and easy way to survey the new edition. And I like the prospect of taking a simplified core of materials to which I can tack on subsytems and doodads from the full-fledged HackMaster. That’s how my group handled D&D Basic and AD&D as kids.

The Southern Reaches Gazetteer – While I’m happy as a clam to be working on my own Cinder campaign setting, there are still a few commercially released settings that I follow. James Mishler’s new version of Judges Guild’s classic Wilderlands setting is one of them. The Southern Reaches will be Adventure Games Publishing's first campaign installment and I can’t wait to see it in its full glory. The map is already available and it hits that sweep spot between eye candy and utility where you can both enjoy looking at it but also get serious gaming done with the thing.

Uresia 3rd edition – Honestly, I don’t plan to rush out to get this one when it’s released simply because I bought both of the first two editions of Uresia back when they were a print product from now-defunct publisher Guardians of Order. But I probably will pick it up eventually because it’s from the always-rad S. John Ross and I’m sure there’ll be plenty of new stuff in it. Unlike the first two editions, where the main differences I could find were ignorable BESM statblocks vesus ignorable BESM d20 statblocks. I decided to keep the original BESM version because of its handy digest size. And also because I’m amused that the cool elf chick GoO put on the cover seems to have absolutely nothing to do with the contents, other than the setting containing some cute elf chicks. Anyway, here’s the most important thing to know about the world of Uresia if you’re unfamiliar with it: the publishers of Cute & Fuzzy Cockfighting Seizure Monsters cut some stuff from the manuscript because they thought it was too over the top. I am totally not making that up.

Opponent Opuscule #2 – Evil schemer Christian Conkle was one of the original people to really get the Encounter Critical vibe. I honestly don’t know if he plans on actually writing the sequel to his awesome EC monster book, but I sure hope he does! Opponent Opuscule #1 is basically the Monster Manual to EC’s terse OD&D-style approach to monster write-ups. All the same monsters are there but whereas the core EC rules give you a statline and nothing more, Conkle’s work gives you a full write-up and some nifty illos. Dig this example: 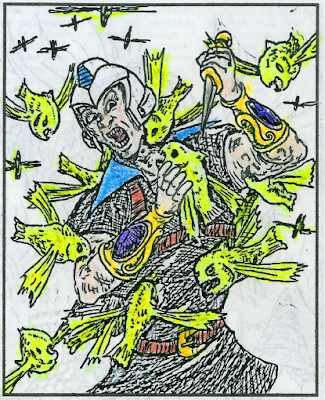 Drawings by Conkle. Colors by yours truly. Yes, that is crayon. Anyhoo, OO #1 covers all the official critters from Asteroid Worm to Whirling Dervish, so that means that book two in the series would be all new critters. That would be so sweet!

The Mooger Incident – I’m not entirely sure what this is going to be, but it’s for Encounter Critical and being written by Rondoo the Mesmerator. Sign me up.

What are all y’all awaiting with baited breath?