Fairly recently a couple of youtube videos have been making the rounds. These clips are a recording at the most recent GenCon of Lou Zocchi giving his infamous spiel about dice. Before I go any further, I want to make sure everyone reading this understands that Zocchi is maybe one of the most underappreciated figures in the hobby. He's designed some great games, such as his Star Fleet Battle Manual. I've never had the chance to play SFBM but on paper it looks a lot more like what I wanted Task Force's Star Fleet Battles to be. He's published great stuff done by other people, such as the generic stat version of Bob Bledsaw's wicked awesome haunted house dungeon Tegel Manor. And in the early days of the hobby he was the only place to go for polyhedrals. I have huge respect for the man and everything he's done for our crazy little hobby.

But when I first watched those videos I linked above, I did so intently but not reverently. Colonel Zocchi's explanations and demonstrations arguing for the superiority of his dice were very interesting stuff. But at the end I asked myself "Is this just a sales pitch?" After all, I don't know crap about making dice. Why should I take Lou Zocchi's word on dice, knowing that he's an interested party in the affair?

So I asked some people for a second opinion. Specifically, I emailed three dice outfits (Chessex, Koplow, and Crystal Caste) and Kevin Cook, a.k.a. the Dice Collector. I sent them all links to the videos and asked for their take on the situation. Mr. Cook was the first one to get back to me. Here's what he said:

He is a showman ... he is very frugal ... but he is not a Liar nor does he stretch the truth

His demonstration does show the tolerances that GameScience dice have ... that other manufacturers do not

Obviously the Dice Collector isn't an impartial observer either, but this bit about Dr. Murray seems sound. I've also heard back from two of the three members of the distinguished competition. One of the nice folks at Crystal Caste declined to make a detailed comment, offering only that Zocchi was a friend but they disagreed on some points. That seems like a fair reply to me. No need to step on anyone's toes in what is a small industry. Chessex offers a longer response, which I will quote in full:

Much of what Lou discusses in the video about production of dice is accurate, however much of it is based on production in the 70's and 80's, such as the old TSR dice that were in the D&D Basic Set he mentioned (which were very poor quality dice). We used to import dice from Asia in the 1980's, but gradually went away from those sources for many of the reasons Lou articulated and stopped buying dice from Asia in the early to mid 1990's. Since then, our dice are manufactured from molds we had made for the factories in Europe and we feel make well-balanced dice. I am not sure of the exact tolerances from face to face, but the last time we checked, they seemed pretty close to each other. Having said all this, for the customers who we see at shows, a surprising number of them actually want dice that seem to roll high or in a certain way. Besides, every one is looking for their "lucky" die. So, the question really is how important are the dice to be perfectly balanced?

Nearly all that Lou talked about did not pertain to our dice since the focus of his video was his dice versus dice made in China or Taiwan. The only part of his video that was directed towards us were the use of lamps at our booth to highlight our dice. The biggest reason we have the lamps is because we sell at a lot of show venues where the lighting is terrible, so poor that it is often difficult to distinguish colors like blue and purple apart from one another. We find it easier for preparations to have the lamps at all shows rather than have them at some and not others, even though it costs $100-$200 for the electrical hookup. The other main reason for the lamps is the extra light helps to bring out the details in the materials we use that normally would be missed by customers when they QUICKLY pass by our booth (after all, at big shows like Gen Con, we only have a few seconds of each attendees time to impress them enough to want to stop to take a closer look at our dice and we think the lamps do help us achieve this result).

So, the lamps are not there only to increase the luster of them, though this is does occur. For example, our opaque dice have not been polished to anything close to a high luster because we think they look better with a slightly matte finish. So, the lamps don't help here.

We actually sell Lou's dice at shows where he does not exhibit as well as to the trade. We think they are a quality product and there is a market for his dice and, since I have always liked Lou, try to help him out by increasing his outlets of distribution. We don't know if this is common knowledge or not, but the producer of the video, Gamestation (or their owners), are in the process of purchasing Gamescience from Lou. Our guess is the promotional value gained from being on You Tube is why the video was made and put up there. We don't have any problem with this and think it is a good idea on their part, but we think they could have been a little more forthcoming in their motivation as to why the video was made. Perhaps we should do some informational videos about our dice, the history of some color developments, etc.

I hope this answers your questions and thanks for sending us the video link.
We found it interesting.

I agree that some of Lou's spiel seems targeted at older dice, like the infamously bad TSR dice of days gone. But for me the most interesting thing here is what Chessex doesn't say. There's no denial of Zocchi's claims about his competitors' inking process, which he suggests as the main place in the process where dice become lopsided. For me personally that was the most important part of the Colonel's patter.

I think it's important to note here that dice are simultaneously two different things in our hobby. On the one hand they are random number generators, intended to provide fair results to all players. On the other hand they are potent totems of gamer culture. The fact that we use weird poly dice is part of our geek heritage. I don't like diceless games or games that use spinners or cards as randomizers because that's not the way we do things. Similarly, Zocchi's technical issues are easily solved by using computerized randomization. A couple of times I tried using columns of electronically produced die-rolls hidden behing my screen, but it felt cold and lifeless to me. 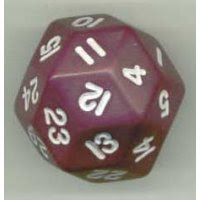 So it seems to me that Zocchi is selling what I want. Gaming as I understand it involves rolling handfuls of weird dice, but it is equally important that those dice work as random number generators. As far as I can tell Colonel Lou doesn't make a d30, so I'm keeping my big purple thirty-sider from the Armory. Other than that, my plan is to rely on Gamescience for my future polyhedral needs.