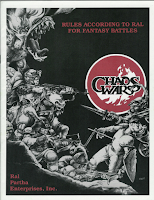 The more I've been kicking around the idea of getting into 1:72 figures the less I've been digging on the original Chainmail as the set to use for mass battles. There's parts I like and parts I don't like, so I've been considering ripping out the subsystems I'm keen on and transplanting them into Chaos Wars. I'm not sure anyone plays Chaos Wars anymore, or even if anybody really did when the rules were published by Ral Partha back in '87.

But I used them for a brief campaign-inside-a-campaign near the end of my hybrid 1st/2nd edition AD&D Bandit Kingdoms game. By that time Pat's bard/wizard was pretty big politically in the Bandit Kingdoms scene. He had bought an almost legitimate noble title and set up shop with a combination mages' school and standard evil overlord tower guarded by orcs and undead. He also had some potent PC and NPC allies, some of whom had strongholds and followers of their own. So I thought I'd try to yank the whole thing out from under him. I broke out my copy of Chaos Wars and invaded Pat's corner of the realm.

We played out three battles over the tabletop. The first was against the forces of the very man who had sold Pat his barony. Some unseen foe had given the dude an even bigger pile of gold to switch sides. I don't recall the opposition in the second battle, but the third and final battle was against a force of monsters, hobgoblins, and amazon cavalry commanded by the inexplicable Doctor Wu.

Doctor Wu had been designed from the ground up as sort of a dark reflection of Pat's character Baron Phostarius. Which makes Wu a pretty bad mofo when you consider that the Baron was a chaotic necromancer! Wu had entered the campaign many sessions earlier as the vizier of Brigandeer Lethbridge-Stuart. I don't remember how the Brigandeer and his brigands came to cross swords with Phostarius and crew. It might have begun as simply as "Hey DM, brigands have treasure types, right?"

Either way, the party ended up fireballing and generally slaughtering the opposition in their usual efficient and bloodthirsty manner. But, unlike most massacres orchestrated by Baron Phostarius, two foes got away that day. One was an inconsequential low level cleric who cast feign death the moment he saw his escape route cut off. The other was Wu, who as a ninja/wu-jen had all the talents he needed to make an effective getaway. But when the battle was over Phostarius had his hands on Wu's spell books. Thus Doctor Wu went underground and began a long, slow-burning revenge that would culminate in war a couple years of game time later.

Anyway, I started this post with the idea of sharing my favorite part of Chaos Wars. Nearly every fantasy mass combat rules I've seen has some sort of mechanic to determine whether your fallen character is really dead or just knocked out. Chaos Wars has the coolest such table I've encountered to date. Dig it:

Fallen Character Table
I absolutely love how the default cosmology of the game is that the campaign world is set between Hell and Valhalla. That's so metal I'm actually typing this while throwing the horns. (And it's not easy.) In one of the battles we played an orc captain of Pat's went down and got result '7'. We rolled a fifty/fifty chance of scarification or cripplage and got scars. So among Pat's entourage is a wickedly scarred ol' orc and we were all there when the pig-faced dude earned them. How cool is that? Sadly, no one was carried off to visit Satan or Odin in any of our three battles.

Remember the amazon cavalry I mentioned earlier? They were commanded by Doctor Wu's daughter and they were one of the few units to get off the board when the final battle didn't go their way. Sometimes I wonder what happened to her and her battle-sisters. But that is another story...