No, seriously. What's attacking us? 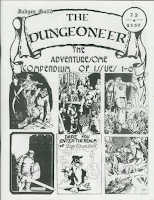 One of my favorite old D&D books is The Dungeoneer: The Adventuresome Compendium of Issues 1-6, sometimes referred to simply as the the Dungeoneer Compendium. The Dungeoneer was Paul Jaquay's early D&D fanzine (later issues talked about other games, too). The adventure/mini-campaign in the back of the Compendium, "Night of the Walking Wet" a.k.a. "The Realm of the Slime God" is one of the purest expressions of wild-and-wooly old school adventure design you'll find. But that's not what I'm talking about today. Instead I want to share some of the awesomely ridiculous monsters in the Compendium's "Monster Matrix" feature. I've already posted about the Tinfoil Monster. Here's three more critters created and illustrated by the same guy, Mark Norton. 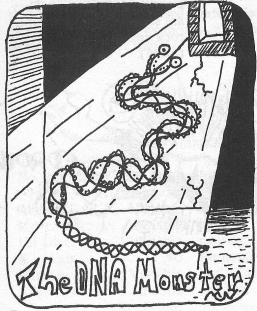 This creature is a huge, enlarged DNA Molecule. It is semi-intelligent but does not speak. This creature has no regular treasure but instead, some atoms in its structure will be gems. The occurence of gems in the DNA creature's body is 15 Percent.

[I'd love to know more about the origin of this creature. Did Mark Norton get creamed on a pop quiz in biology? Is this a commentary on the inhuman nature of our genetic imperatives? Was he high?] 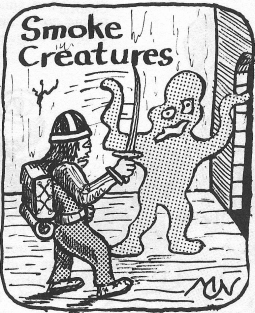 [These critters could be pretty dang scary, appearing in huge numbers and immune to normal weapons. But its a little hard to get too worked up by them given the silly illustration, isn't it? I love the adventurer in the pick. He looks like an ordinary dude with a crappy helmet and some campaign gear. "Oh, crap! My sword don't work on this guy!"] 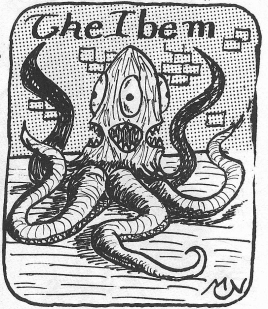 This monster of many arms, many eyes and of course many mouths. It has 4 eyes, 8 tentacles, and 4 mouths. It will attack a maximum of 3 times from any given side that it is attacked from or facing. It will not bite unless its prey is ensnared in its tentacles.

[Because you can never have too many slobbering tentacled horrors.]