The coolest thing Ray ever did

One of the guys I used to game with was a feller named Ray St. John. I don't always give out full names when I tell old stories, but I mention his full moniker in case any Gameblog readers out west way may know him. I lost track of him after he moved back to his native Washington state to take a job in the aeronautics industry. Tell Ray to send me an email, if you know him. As always, I'm at the jrients to the gmail at the dot com.

Ray was an old time D&D player, getting his start in the Air Force back in the days when D&D was this strange new kind of wargame. But all his years of play experience and general life experience didn't always show through, because he came off as a bit of a lovable goof. He tended to act first and think second when playing and sometimes in social situations as well. As a DM I found that he made an excellent foil to thorough planners and SWAT team dungeoneers. I could count on him to keep things interesting. 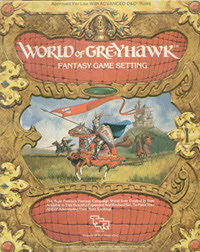 Ray was one of the longest running players in my old campaign set in the Bandit Kingdoms, a nasty little corner of the World of Greyhawk. The PCs in that group tended towards the chaotic and evil sectors of the alignment chart. The most socially astute PC in the setting was Doctor (later Baron) Phostarius, a chaotic neutral bard/mage with a penchant for necromancy. Ray played Doc's half-drow half-brother, the evil mercenary captain/cavalier Sir Cleave, the Count of Bronze.

One time I had a gandalf/elminster type (who was really a grey slaad in disguise) send the brothers in search of the Cauldron of Chaos, which was being held by the forces of Niceness in the an invisible double pyramid (stacked base-to-base like a d8) made out of solidified Elemental Air. It served as home to a wide array of Lawful Good monsters. I can't remember the whole cast of the affair, but I recall Corporal Angry and his Hooting Commandos, a group of halfings in WWII togs, and King Artie and his Knights of the Card Table, some chump paladins who drank cheap beer and played a lot of penny ante poker while talking about maybe going out and slaying some badguys.

I set up as one of the meanest fights in the place a bigass Silver Dragon. This is where things got awesome. Ray, out of the friggin' blue, decides to parlay with the dragon. This caught me off guard, as usually this group's idea of NPC negotiations normally consisted of declaring "Everyone still alive is my prisoner" after lobbing some fireballs. Instead, Sir Cleave challenges the dragon to a contest.

Cleave takes from his pack 4 crystal wine glasses and 5 large tankards. He fills the glasses with wine and the tankards with ale. I, for one, am surprised to discover that Ray has anything on his equipment list that isn't a weapon, armor, or a healing potion. Ray proposes a drinking contest. If he can finish off the large tankards of ale before the dragon drinks the wine, the party must be allowed to pass freely.

I suggest to Ray that a small enough dose of poison to fit in the wine glass and pass undetected will do little to a huge dragon. Ray assures me that the wine is unpoisoned. The dragon asserts that only Sir Cleave will be allowed to participate in the contest. Ray states "The conditions of the contest are that only I may touch the tankards and only you may touches the glasses. Anything else results in a forfeit. Agreed?" The dragon consents and the contest begins.

Where Ray was heading with this, I honestly did not know. I narrated that the dragon started quickly downing a couple of wines like shots as Sir Cleave quaffed his first tankard. Ray asks if he has finished his first tankard before the dragon's last glass of wine. "Sure," I say, "the dragon is reaching for his third glass of wine as you finish guzzling your first mug of ale." Ray smiles that smile that players only smile when they've got the DM right where they want him.

"I turn my tankard upside down and place it over the last glass of wine."

On the spot like that, I couldn't figure out a way the dragon could retrieve his last glass without touching the forbidden tankard and forfeiting. Sir Cleave, the party tank, had outwitted an ancient dragon and the party passed his lair without a fight. The dungeon still had plenty of tough fights. I vaguely recall some guardians nagas and at least one shedu.

I can't quite remember whether Sir Cleave shattered his vorpal blade before or after that incident, but I can honestly tell you it was not in retaliation. The dude rolled a crit with it against a clay golem, against whom only enchanted blunt weapons do damage. I felt that something had to give way under the force of such a mighty blow. You should have seen the look on his face. No doubt it somewhat resembled my visage after he outwitted my dragon.