Behold, the Orchestra of Fear! The Conductress originally organized the Orchestra of Fear as a means of avenging herself against the male chauvinist pigs running the New Bronze Symphony. How dare they keep her from her lifelong dream of conducting the NBS, just because she's a woman! But she's since learned that crime can also be fun and profitable. As a result of a freak electrical accident the Conductress can channel lightning through her metal baton. 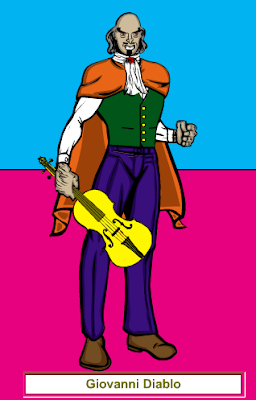 Giovanni Diablo had been an unsuccesful solo villain for several years when the Conductress recruited him. His powers are impressive but a glass jaw makes him an easy target for two-fisted superheroing. Giovanni claims he was given his magical violin by the Devil himself. 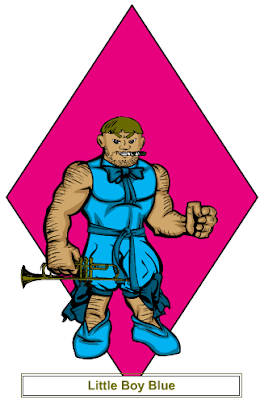 The Orchestra of Fear is Little Boy Blue's third gang. He was originally part of the Midget Mob, a small (heh) group that for a time terrorized the happy harbor town of Argenta. While in the klink he was busted out of jail by Mother Goose and shanghaied into her Crime Rhymers gang. It was she who gave him the outfit, the codename, and the sonic disruptor trumpet. Little Boy Blue managed to escape the last big dust-up with Captain Groovy (RIP) when the rest of the Rhymers were sent up the river. 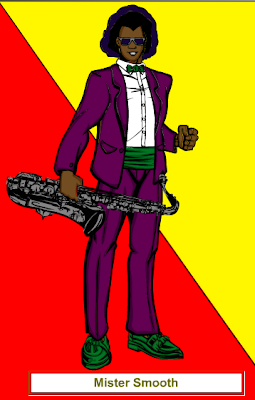 Mr. Smooth's previous gimmick was that of a kung fu master who carried and used a bewildering variety of exotic weapons. The Conductress gave him the Saturnium saxophone and challenged him to defeat his foes with only one ungainly weapon. Truth be told, Mr. Smooth does not know how to play the horn he carries, but he can sure beat your sorry ass with it.