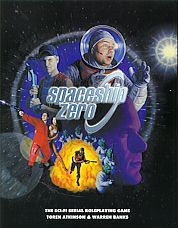 Just so you know, Encounter Critical is not the only game based upon a foundation of phantasm. S. John Ross's earlier Pokethulhu rpg often refers to the original Pokethulhu cartoon, despite no such cartoon ever existing. Another example of an apocryphal game is Green Ronin's Spaceship Zero. It's based upon a sci-fi radio serial that also never existed. As I understand it, the rulebook even contains an episode guide just like you'd get from a licensed game. Cynthia Celeste Miller's Omlevex operates on a similar but more subdued conceit, using such devices as faux comic covers for the characters in her super-hero setting. Silver Age Sentinels does much the same with it's house setting. Neither Omlevex or SAS push the hoax angle as hard as Encounter Critical did or Spaceship Zero continues to do. Heck, you can buy the soundtrack to the Spaceship Zero movie. (Toren "MacBin" Atkinson and Warren Banks, the authors of Zero, are members of Darkest of the Hillside Thickets, whom I consider to be the heirs apparent to the throne of Blue Oyster Cult. In my mind that's a pretty cool throne, with skulls and stuff.)

Another great example of an apocryphal RPG is Olivier Legrand's Mazes & Minotaurs. Back in 2002 cool game dude Paul Elliott (a.k.a. Mithras, a.k.a. the author of GURPS Atomic Horror and lotsa other cool stuff) wrote an RPGnet column entitled The Gygax - Arneson Tapes, in which he outlines a thought experiment with the following premise: what if the grandfathers of roleplaying had been more into Jason & The Argonauts? Monsieur Legrand takes this idea and rolls with it, producing a complete vintage game that was the progenitor rpg in some alternate universe. And it looks pretty dang cool, too.

HackMaster could also be viewed as an apocryphal game, considering that the author is a fictional character from the pages of Knights of the Dinner Table. I'd really love to see someone produce a first edition HackMaster rulebook, or a Basic HackMaster. I'd buy a Basic HackMaster boxed set in a minute, as long as it came with a module like Little Keep on the Borderlands or Quest for the Unknown. The full-on version of the game is just too much for me. I can only handle one 1000+ page rpg in my life and that slot is already taken by you-know-what. 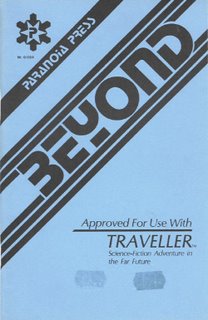 Another form of apocryphal gaming would be adventures in the de-canonized. FASA produced some great material for Star Trek that no longer fits the overal Trek milieu. My favorite such bit would be the Four Years War, a Klingon-Federation conflict set prior to the Original Series. Similarly, you can't run a canonical Star Wars game based upon the Droids cartoon series anymore. Due to the events in Episode I, Droids has been banished to the same Lucasian Limbo as the Star Wars Holiday Special. According to reports Marc Miller, Traveller's Lord and Saviour, has seen fit to remove his blessing from two previously official regions of the Traveller universe: the Gateway Quadrant from Judges Guild and The Beyond from Paranoia Press. I've got the four sector books from the Gateway Quadrant series. I can see why some hard sci-fi fans would find them too silly, but to me the Quadrant looks like a great place to set some zap-bang space opera. I don't have any firsthand knowledge of The Beyond, but my sources say its even less serious than the Judges Guild material. At the moment I can't think of any non-sci-fi examples of previously-canonical-now-apocryphal gaming material, but I bet it's out there and I'm just being dim.

The gold medal example of an apocryphal game has to be Epic Legends of the Hierarchs: The Elemenstor Saga Pen & Paper RPG, which was definitely not published by Black Fox Games back in 1997. ELotH:TESP&PRPG was never produced because the Epic Legends of the Hierarchs saga is itself a playful hoax meant to mock fantasy novels and anime and such. No doubt someone will eventually write a d20 version anyway. Me, I'm tempted to get get a copy of Spaceship Zero and write up a Savage Worlds conversion. IMHO the authors of the officially licensed SSZ game clearly failed to capture the true spirit of the original radio show.