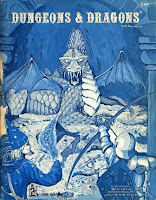 I woke up this morning thinking it might be neat to imagine what wizards might have looked like if they were written up as a foe in the monster section of the Holmes edit of D&D.  Here's what I came up with.


Wizards are semi-human spellcasters whose abilities exceed that of normal magic-users.  They have 2d4 first level and d6 second level spells available to them, as well as d4 strange powers beyond the normal spell rules.  50% of all wizards have some sort of aberrant appearance that reveals their inhuman nature.  Most wizards have d6 unusual minions, such as demonic imps, a hunchback, robots, a super-intelligent horse, etc.

Why do wizards have AC 5?  Because they're wizards.