So the Dungeon Crawl Classics RPG gives the fighterly types this thing called an Attack Die.  At first level you get a d3 and it increases in die size as you advance.  You roll this die every time you make an attack, in addition to the standard to-hit roll.  The Attack Die roll has three functions:

2) If your combined roll is a hit, you also get to add the same number rolled to the damage you do to the foe.

3) You can declare a Mighty Deed of Arms, which is basically the stunt system of the game.  If you hit and if you rolled a 3 or higher on your Attack Die, you also pull off your Mighty Deed.

There's a bit more to the Mighty Deed rules we can ignore here, but overall there's some neat stuff happening with these rules.  Clearly you could just bolt these rules directly onto other D&D type games with little difficulty.  In general anything that makes the fighter types feel fresh and interesting seems to be worth investigating further, I think these rules need a little tweaking. 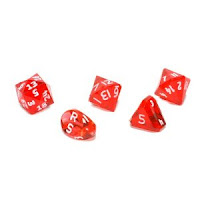 First of all, I don't like the idea of asking someone in a Google+ game to roll a d3 all the dang time.  I can bring extra funky dice to my FLGS games, but I don't think it's fair to expect everyone online to own a d3 or d5 or whatever.  Yes, there are work-arounds such as rolling a d4 and re-rolling 4's or using one of the d6/2 methods, but that just seems clumsy when you are using that faux die with every dang to-hit roll.

Second, I'm not sure I like stunt systems any more.  I'd rather the players just declare awesome actions and we resolve them on the fly.  About the only thing I like about codified stunt rules is that there existence suggests to players that stunts are possible, but there are other ways to communicate that fact,

So here's my idea for adopting the Attack Die to baseline D&D:  Keep the normal to-hit progression for fighter types.  Disallow weapon specialization or any other stuff that would give additional bonuses to fighters.  Instead, all fighters get to roll a d6 with every to-hit roll.  If the roll comes up a 6 then they get either +6 to-hit or +6 damage but not both.  Call it a Mighty Strike or some similar nonsense and Bob's your uncle.

Yeah, a +6 modifier on either roll is pretty big and bad but keep in mind that there will be times when the d20 roll plus 6 will still be a miss.  You could use a d4 and get a 25% chance of +4 to-hit or damage instead of a ~16% chance of +6, but I hate rolling d4s.  Does anyone like those things?