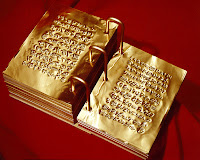 Howdy folks!  The semester is over so time to get back to bloggering about games.  Here's a campaign concept I've been kicking around.  It sort of follows the Wessex line of thinking in adapting someone else's non-wizardy setting for D&D play.  Instead of borrowing from Thomas Hardy, this campaign would lean on the Book of Mormon, the third testament of the Latter Day Saints.  It's a pretty intriguing text.

According to the Book of Mormon America was settled by four different groups, each descended from people mentioned in the Old Testament.  The first group, the Jaredites, rode across the ocean in vessels kinda like Noah's Ark way back when the Tower of Babel was under construction.  They avoided the confounding of languages and thus spoke the original language of Adam and Eve.  Because they exit the Middle East prior to Abraham and Moses and the Babylonian Captivity, their culture would have very few points of contact with ancient Judaism.  By the traditional Mormon chronology the Jaredites arrive in the New World around 3,000 BC.  For two and half millennia or so they are the only human on the continent and they eventually flourish into a kingdom of 2 millions, somewhere in the north.

Near the time of the fall of the Kingdom of Judah and the Babylonian Captivity, which can be fairly certainly dated to 587 BC or so, the other three groups arrive.  The Nephites and Lamanites, both descended from a prophet, settle fair to the south.  The Mulekites, consisting of the last prince of Judah and his followers, settle much closer to the land of the Jaredites.  By the time the Mulekites, Nephites and Lamanites arrive Jaredite civilization has gone down the crapper.  The Mulekites encounter the sole survivor, the last king to rule over the Jaredites.  His kingdom is in ruins.

The campaign would be set three hundred years after that point, when the Mulekites and the other two groups discover each others' existence.  Local PCs would consist of members of any of the three extant tribes of humanity, as well as the three standard demi-human races.  Halflings would be of the homo floresiensis variety, though whether natives or fellow travellers with one or more of the human races I don't know.  I'm thinking elves might be the descendants of Cain and/or Lilith, who live as a secret enclave within the ranks of humanity.  Dwarves would be descendants of the dudes that helped the Supreme Being create the world. 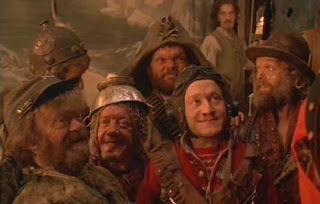 The adventurers would be based in a remote frontier town on the edge of Zarahemla, the kingdom of the Mulekites.  Sessions would consist of expeditions into the desolated realm of the Jaredites, in search of their lost cities.  Since the Jaredites had 2,500 years to themselves they could have developed all sorts of whacky super-science, so in addition to your standard gold and jewels their ruined cities could contain all sorts of death rays and hover cars and robots just ripe for the plundering.  Obviously there would also be degenerate subhuman remnants of the Jaredites, Cthulhoid entities and giant freakin' snakes.