It's been a while since I updated all y'all on my Mutant Future campaign. Last night the faithful gathered at the Armored Gopher for their third session attempting to loot Dave Hargrave's Howling Tower. The player roster included campaign stalwarts Carl, Dane and Joe and relative newcomers Austin and Charles. It was the second session for the latter gentlemen.
Austin hadn't been to the campaign in several sessions (which is totally okay, it's meant to be a 'drop in when you please' sort of affair) and wanted to make a new character. Like any right-thinking non-communist he opted to play a mutant, affording him the opportunity to roll on my Mutation Compilation. I don't think I've told you nice people about this little house rule I've developed. One of the hazards of random mutation charts is that they are finite in scope. At some point a player will throw the dice and end up with nothing but mutations we've already seen in play. This can be quite disappointing, even when the mutations are powerful. In short, no game I've seen ever has enough mutations. The Mutation Compilation is my response to this issue. I simply dug up every mutation type chart I could and made each such chart a subchart of a d20 table. This is how Austin's mutant panda bear ended up with poison excretions from some online post-apoc RPG, batwings off the Hordlings charts in the 1st edition Monster Manual II, and squid tentacles coming from out his head from I don't even remember what game.

The Mutation Compilation proved very handy last night because the everybody else ended up rolling up new PCs as well. While looting level one they stumbled across a door that everyone in the party failed to open. Carl couldn't stand the fact that this door refused to yield, so he got out his crowbar and pickaxe and went to work. Two turns later the door was utterly demolished. The room beyond was sunken 4 feet below the floor level of the rest of the dungeon and filled with greenish, swampy water. Just peeking above the water line is the lid of an enormous stone chest or sarcophagus. Dane's character, an android centaur, teleports onto the top of the lid. That's when the Vroats attack. The insectoid Phraint is fighting a Vroat in this Erol Otus illo: 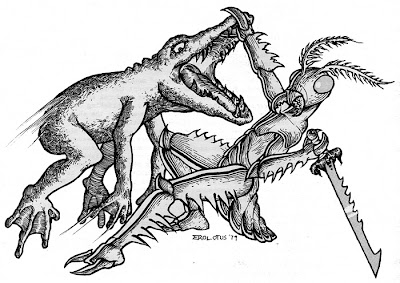 A Vroat's basic deal is that that it hops at you like a frog but eats your face like an alligator. And three of these things want to destroy Dane's PC. Dane immediately gives one of the Vroats a face full of shotgun, but it doesn't go down. Carl lights up another with a plasma pistol blast and Charles fires his crossbow wildly as Austin takes to the air and Joe dives into the water.

That's when the wandering monster showed up. I had rolled a wandering monster during the door demolition project. But I thought to myself "Hmmm, this could get pretty hairy what with three Vroats in the next room. How bad will the wandering monster's timing be?" I decided to roll a d6, the closer to six I got the less favorable the monsters arrival on the scene. Of course I got a six.

The monster's first attack was to breathe a cone of acid on Carl and Charles, who are still standing in the ex-doorway. They both blow their save. The damage is minor, but I make them roll item saves for all their gear, with a 1 on a d6 destroying the item. That's when someone at the table inquires if Carl is still carrying the mysterious metal egg (roughly football sized) found two sessions or so back. He is and unfortunately it is a bomb. I give Carl a fifty/fifty chance the bomb is destroyed without detonating but the dice go the wrong way. This particular device does 75 points of damage to everyone in 150', no save.

Initially I declare everyone dead, but Dane goes to work. Dane is in law school. He doesn't rule lawyer but by God he is great at arguing to his maximum benefit in ill-defined imaginary scenarios. He's always polite, often quite imaginative and usually entertaining when he gets on a roll, so he gets away with a lot of shenanigans in my game. Sometimes I have to stop him with a stone cold "No" but this time I let him plead his case. After arguing that Austin's cthulhu panda was out of the direct blast by virtue of being in flight near the ceiling, I allow a die roll to save the critter and he makes it. I give Dane a slimmer chance on his 'hiding behind the Vroat and letting it absorb the blast' plan, and the dice do not go his way. So Austin end ups being the lone survivor of third expedition to the Howling Tower.

Let me tell you about how great these players are. They start rolling dice for new characters before I even finish digging up new charsheets for them. No whining or complaining, they all roll with the punches and are eager to get right back in the game. Hell, this is Carl's third party slaughter since I started running games at the store a year ago. So here's the new party members:

Joe - Joe said "I want to be a demon" and rolled up a mutant humanoid with a prehensile tail, a prehensile tongue 6 meters long, and a face on each knee. I don't know how he does that.

Charles - a skeleton man (all his organs, muscles, etc. exist in another dimension) with a 10' diameter neon green afro and the ability to regenerate like a troll

There first order of business was to dash back to the dungeon and get the loot out of that damn chest! Austin had fled in a panic and left it behind. The haul was quite rich, which they used to buy armor and stuff. They also traded a bunch of clocks found in another room for some guns. I can't wait to see what damage these weirdos do in two weeks!