Recommended: The Spire of Iron and Crystal 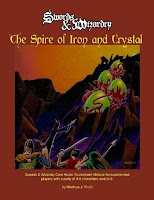 So yesterday I read The Spire of Iron and Crystal, a Swords & Wizardry adventure from S&W guru Matthew Finch. Man, this is great stuff. The Spire compares very favorably in tone and content to module B4 The Lost City, by the late great Tom Moldvay. Both riff off that great old weird fantasy trope of the forgotten last outpost of an ancient, corrupted civilization. I eat this sort of Cthulhuesque stuff up and it makes for great drop-in adventures that could be slotted into nearly any campaign. I could totally use The Spire of Iron and Crystal in either my World of Cinder or the pseudo-historical Japanese setting I've been working on. And adapting the module to Geoffrey McKinney's Carcosa would require rather little work, mostly just changing a couple spell scrolls. Though branded for Swords & Wizardry, I don't spot anything that makes the module incompatible with the vast majority of old editions and retro-clones of D&D.
You can get your own copy of The Spire of Iron and Crystal at lulu.