One of the constant criticisms leveled at Traveller and several other sci-fi RPGs is that the spacemaps are all in 2-d. It's a legit beef, since being three dimensional is sorta why we call it Outer Space and not Outer Plane. Among the Trav fans I've seen three basic responses to this problem:

1. The Trav maps are like roadmaps. Triple A doesn't usually mark elevations on their maps because all you need is clear directions to your destination, not feet above sea level.

2. Jumpspace, the spooky fairyland ships use to go FTL, is flatter than realspace and thus a 2-d map works just fine.

3. Shut up. We're playing a stupid game, for crying out loud.

While choices 1. and 3. have a certain appeal, I like option 2 the best because of all the rad stuff you can do with the concept of a jump plane running through the galaxy. I'm going to try to demonstrate some of these ideas with pictures, but this is my first time working with iso-type graph paper so it may be a little inept. 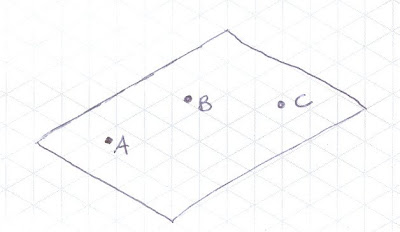 Figure 1 - Here we have a perfectly ordinary subsector, sitting in space minding it's own business. A jump plane map (i.e. standard subsector map) and a realspace map of this region would look identical. If you imagine a Star D floating above or below the plane, that star would be inaccessible by jump drive and hence astrographers would omit that system from the standard jump map. 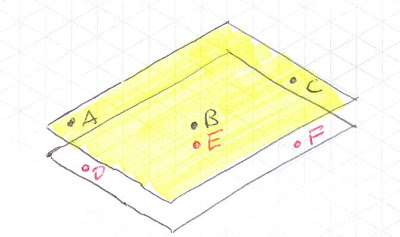 Figure 2 - What if more than one jump plane cut through the galaxy? Ships on the yellow jump plane could visit systems A, B and C. Ships on the white jump plane (below and parallel to the yellow one) could visit D, E and F. Even though B and E are very close to one another, you cannot plot a jump course from one to the other because there is no jump plane connecting them. If you want to get really crazy with your campaign you could introduce a second FTL drive that doesn't use jump space at all. A merchant with a warp drive (or whatever) could make zillions of credits moving goods between B and E. Without such a drive the civilization of A, B and C would probably be completely different from that of D, E and F. They could communicate via lightspeed transmission and STL ships, but compared to the hustle bustle of life with jump drives that may not amount to much. 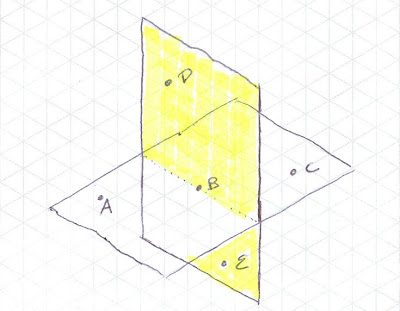 Figure 3 - Here we have two different jump planes, but they intersect. A ship at system A could jump to B or C but they couldn't reach D or E in a single jump, since there's no direct jump plane connection. The ship at A would have to jump to B, then jump to D or E. Obviously, a world like B could be of enormous strategic interest to the powers that be. 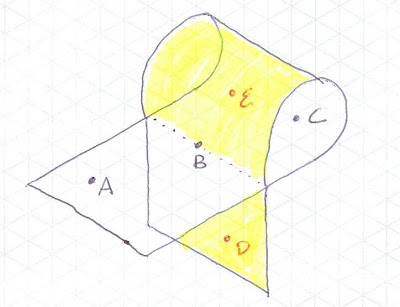 Figure 4 - Here the jump plane is curved vis-a-vis normal space. Here you can plot a course from A to D, but it would be a very long jump, possibly outside the range of any known drive. Jumping to B then D would be the smart thing to do for most vessels. A navigator in a ship at system C could actually plot two different courses to system B, a short one and a long one. 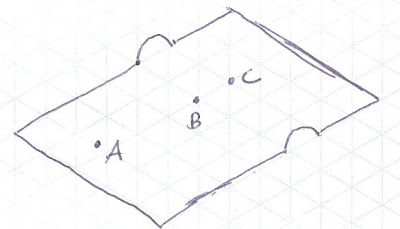 Figure 5 - Here's a bump in the jump plane. B and C appears to be one parsec away in real space, but the the navigator has to plot a Jump 2 to get there. The Scout service identifies these sort of hazards and marks the maps accordingly, but in uncharted space something like this could leave you in the middle of space and out of fuel. 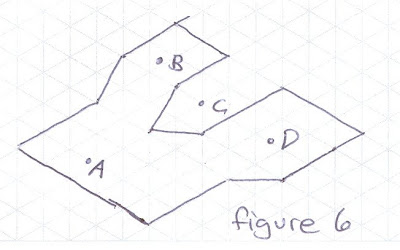 Figure 6 - A hole in the jump plane makes travel to world C impossible. And to go from B to D requires an intermediary jump to world A.

Now imagine that the the jump plane used the the 3rd Imperium, et al., is twisted and torn and tangled in ways a hundred times more complicated than my simple examples. This would easily explains oddities in the official maps like the Antares system being in the wrong place. It would also explain why ships need both fancy nav programs and high paid navigators. You can't just point the ship at the nearest star and hope for the best.

Someone with actual skills at geometry could probably come up with additional jump plane scenarios.