How to Ruin A Perfectly Good Subsector

As we all know, Encounter Critical can be used for any sort of role play adventure. Any setting from any rpg, wargame, book, film, TV show, comic, play, wrestling promotion, toy line, or cereal box can be used as the basis for a series of EC adventures. Why just last week I was playing in a rousing game of Encounter Critical based upon the Meredith Wilson classic The Music Man. 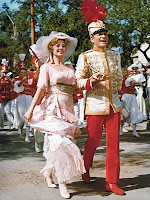 My fellow adventurers and I failed to retrieve the legendary Golden Medallion of Aught Five, but at least we defeated the Four Headed Barbershop School Board of Doom. (Okay, I lied. I just made that up. But I would totally play that game.) Since the primary, but by no means only, influences on EC are fantastical and science fictional in nature, those are the best places to go to start looking for campaign fodder. The path of least resistance for making an Encounter Critical campaign probably involves taking a fantasy setting and adding more robots and lasers and mutants. I say ‘more’ because any fantasy campaign worth its salt has at least a handful of those things, or could have them and nobody would blink. Today, I’m going to look at another option: starting with a sci-fi setting and tarting it up with fantasy.

My victim for this exercise will be Drexilthar Subsector from Traveller’s Charted Space setting, a.k.a. the 3rd Imperium and environs. Drexilthar isn’t one of those better-known subsectors like Regina in the Spinward Marches, but it’s one of my favorite in Trav canon. T

he book A Pilot’s Guide to Drexilthar Subsector is one of the many, many cool things created for Traveller by the legendary Keith brothers. What I like about Drexilthar is that by devoting a whole standard-sized Trav booklet to a single subsector, you get a nice write-up for each planet. I find that approach much more user-friendly than the sector book approach, where you get sixteen times more planets, but most of them are nothing more than a string of Universal World Profile digits. By the way, you can still get A Pilot’s Guide to Drexilthar Subsector, and several other awesome old rpg books, from the Different Worlds website. But feel free to pick another subsector for your EC galaxy. For other subsector data to abuse go here or here. Or BeRKA of the Zhodani Base will be happy to randomly generate one for you.

Anyway, here’s one method for putting your selected subsector to work for you as an EC campaign. For starters, don’t get in a hurry to alter any of the UWP data, that just ruins the point of stealing UWPs to begin with. (Of course you can do anything you want with your campaign; I’m just telling you this one method.) Instead, try interpreting that Universal World Profile through a crazy-go-nuts EC lens. So take the world of Kraan as an example. The Pilot’s Guide tells us Kraan’s UWP is C501456-8. That breaks down as an average starport at a smallish world with no atmosphere but polar icecaps, inhabited by about a thousand or so people with a representative democracy where everyone carries a shotgun. Yee-haw! 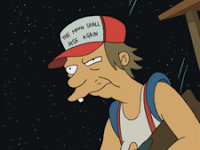 Okay, so Encounter Critical thinking was starting to seep in on that shotgun bit. The Law Level of the planet indicates that shotguns are the only weapon you can legally carry. That doesn’t mean that everyone always walks around with one, unless you want it to. That highlights one of the core tenets of my thinking on EC: plausibility is for amateurs.

So let’s think about the UWP for a little bit. Why would anyone live on an airless turd of a world like Kraan? In Traveller the default answer is ‘economic advantage’, which is Marc Miller’s secret code phrase for ‘to make a buck’. Following Miller’s logic the usual reason a colony is set up on these vacuum worlds is to mine radioactives or mysterious sci-fi mumbo-jumbo minerals and sure enough that’s the route J. Andrew Keith took in his write-up of Kraan. Keith also puts an archaeological site on Kraan, which coincidentally sits on a big lanthanum vein. Lanthanum is the most important mineral in the Trav universe, as it is a key component of FTL jump drives. I can’t speak for your brain, but mine immediately starts thinking along the lines of the Lanthanum P 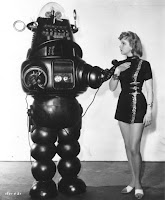 its of Kraan, a dungeon full of robots that can teleport around the room like blink dogs led by a cyborg lich with an atomic heart. After centuries of preparations the lich is finally ready to move against the surface dwellers. Soon they shall all be his cyber-slaves! [insert villainous cackling here]

Let’s go back to those 1,000 or so surface dwellers menaced by the minions of the Cybo-Lich. Why does a mining town of 1,000 need a representative democracy? For a community that small a direct democracy could easily work, with an elected mayor to run day-to-day government business. The text says that traditionally four mining outfits own all the mineral rights to the planet. But what if they licensed those rights to smaller outfits, because the ore veins are scattered about the planet in a way that makes large scale mining less profitable? Maybe those 1,000 people are split up across the face of the planet in ten or twenty smalltime operations. They usually all leave well enough alone, but they all have a vested interest in the lone starport, so some sort of centralized government is needed. Each mine camp sends one rep to the planetary council at the starport/capitol. So with just a thousand people on the world you’ve got all sorts of possible dynamics between the four companies, the archaeologists, the mining camps, the starport authority, and the planetary council.

Now let’s give those thousand people some EC color. For starters, the world ‘people’ could means lots of different things in Encounter Critical. A mining colony immediately suggests dwarves, but let’s put that aside as too pat an answer. Maybe the dwarves, being so skille 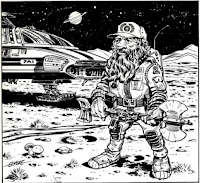 d in mining and well-capitalized, can afford to only work large scale operations on planets with amenities (like atmospheres). Maybe the four companies who own the mineral rights are dwarves, but for a third-rate operation like Kraan they bid the rights out to others. Maybe the composition of each of the outlying camps merits a roll on the Race Determination chart on page five of the EC rulebook. That way some of the mines are run by klengons and some by hoblings and maybe even a few by plain, ordinary humans. A planetary council meeting should look like the League of Non-Aligned Worlds meeting in the Mos Eisley cantina.

For one last bit of UWP-generated Encounter Critical weirdness, look at the tech level of the planet. Normally, the tech level of a planet indicates what goods are readily available for PCs to buy, but for EC we can squeeze a little more mojo out of that number. Kraan is rated at TL8, which the UWP key in the Pilot’s Guide lists as ‘Circa 1980 to 1990’. Are you thinking what I’m thinking? I’m thinking a starport festooned with breakdancing wookeys carrying ginormous boomboxes and vulki 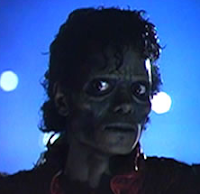 n doxies dressed like early Madonna videos. I’m thinking TRS-80 computers and Pac-Man arcade games. I’m thinking criminals from Beat It and the living dead from Thriller, both ruled by a mysterious half-zombie who wears red leather armor and a glowing magical gauntlet.

That’s enough on Kraan, I think. Looking at Drexilthar in general, I think a lot can be achieved by simply remembering to add more dragons and wizards. That’s what most players seem to want when you talk about fantasy gaming, so why not just give it to them? And don’t hesitate to steal from Star Wars and Star Trek. Go ahead and make the Imperium into the evil galactic empire of Star Wars. When you’re playing Encounter Critical you d 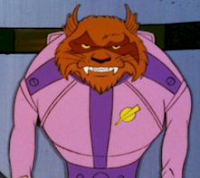 on’t need to be shy about such things. A couple star destroyers wandering the hexmap commanded by an evil psi-witch named Darth Something-Or-Other will keep the PCs on their toes. Canonically the Drexilthar subsector is relatively close to Aslan space, but Trav’s catmen have never suited me (I’m more of a fan of the K’kree and Hivers). I’d probably just swipe Niven’s Kzinti as they appeared in that Star Trek cartoon, pink spacesuits and all.