I seem to be getting older every damn day. It used to be that I wouldn’t think twice of starting a six or eight hour session of D&D at 8pm or later. Now I can turn into a big grumpy butt if I don’t get to bed before 10 or 11. When a session runs late I reach a point where I just want to stop, no matter what is going at the table. At some point into the night I’m no longer interested in bringing the session to a logical stopping point. Finding a ‘good place’ to end the game invariably involves at least 30 more minutes of play. And by the time I start thinking about ending the session I’m already starting to run out of steam, so those last 30 minutes will probably involve the shoddiest GMing of the night. Clearly, there’s got to be a better way to bring a session to a close.

Back when I ran my gonzo 3.5 game there were a few sessions where near the end of the night I found myself fading fast in the middle of a bigass tactically-crunchy five-foot-stepping ‘combat’. ( I put the word ‘combat’ in scare quotes because the more distance I get from WotC’s idea of how battles work the less I see rules for fighting and the more I see some sort of hideous Kabuki Improv/Extreme Chess hybrid that has little to do with the blood and thunder I want out of a combat system.) So what I did back then was to arbitrarily declare the combat over: “And then the bad guys run away. End of session.” Not exactly the most dramatic of methods, but it got the job done.

With Labyrinth Lord and most of my favorite iterations of D&D long drawn-out combats aren’t that big of an issue. The combat system moves along at a better clip and the badguys actually do run away regularly thanks to the morale rules. I still don’t get why 3e/3.5 lacked morale rules. Moldvay and Mentzer had great morale rules, so much so that I’ve actually penciled Moldvay’s morale ratings into my copy of the OD&D monster book. AD&D’s morale rules were more fiddly and I could rarely find them in the DMG when I needed them, but they worked. Second edition’s morale rules were an improvement over first edition, but as I recall a sizeable chart of situational modifiers kept them from being as clean as Tom Moldvay’s version.

My real problem with old school D&D at the end of the night is the dungeon environment. What do you do if it’s past your bedtime and the players are still on level seven of the dungeon? In a modern set-up you could just freeze frame the game, make a note as to the room and level the party is on and pick back up in the dungeon next session. I have three objections to that arrangement. First, between sessions many players get ideas about things they want do at the start of the next game. If a player comes up with something pro-active like that I don’t want to tell them no unless absolutely necessary. Second, my plan for my next campaign is to run a no-commitment-required open table at the friendly local game store. Under that arrangement I can’t guarantee that session five’s table will have any of the players from session four.

Third, I don’t like the impression stopping in the middle of the dungeon gives the players. If we’re talking about a canned adventure or a smallish dungeon that they’re trying to clear in one go then I don’t mind too much. But for big honkin’ campaign-centerpiece mega-dungeons I just don’t like the message sent by stopping in the middle of the complex. Sure, the players all understand that the game is halted as if you pressed paused on a video game. But alongside that rational knowledge of metagame time management is the subtext that their characters are just hanging out in the dungeon for a couple of weeks, completely safe from harm until the players next sling dice. It’s not that hard to imagine the adventurers hanging around some dismal chamber, smoking cigs and playing cards until the players get back to the game. While pretty funny (especially if you imagine the monsters joining in the card game), that’s not exactly the image I want in my players’ heads. I want each visit to the dungeon to be a desperate battle of wits with half-illumined horrors, where just getting out alive is a victory.

All of three of these objections to ending a session deep in the dungeon have led me to consider some sort of half-baked house rules. I want to provide the players with a reason not to try “one last room” when we’re twenty minutes from the appointed end time for the session. OD&D Discussion Board regular korgoth offers a great take on solving the problem with his excellent Table of Despair. Dig it:

The Table of Despair

1-4: Thy flesh is consumed by underworld denizens!

5: Thou art lost to time and space.

6-8: Naked and bereft dost thou escape the nightmare below.

I love that chart, but it’s designed for Empire of the Petal Throne. I’m told EPT tends to have pretty wicked dungeons, closer to the Tomb of Horrors or an average Call of Cthulhu hellhole as opposed to delightful little romps like the Caves of Chaos. So I’ve been kicking around other approaches to achieve the same basic effect. Enter Dawn Patrol. 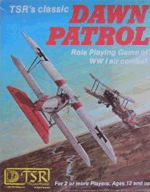 Mike “St. Carmichael” Carr’s Dawn Patrol, originally known as Fight in the Skies, is a game of World War One dogfighting. When I’m feeling ornery I like to make the claim that “Triggerman” Carr actually created the first RPG product, not that Johnny-come-lately duo Gygax and Arneson. I feel half-justified in making such pronouncements because Fight in the Skies places a lot of emphasis on the pilots in a way that looks very familiar to modern role-players. Pilots are given individual names, tracked over multiple sessions and as they rack up experience they gain bonuses in combat. The pilots can also earn medals, promotions, and the opportunity to fly newer, better planes. But for my purposes here the most important part are the rules for being shot down over the front.

In Dawn Patrol if you are shot down over the front you have a 50% chance of escaping into friendly territory. Otherwise you make a d6 roll to see if you are captured or killed: 1-3 captured, 4-6 killed. If captured you get one roll at 1 in 6 odds of escaping capture to return to play. If you blow that roll your dude is a P.O.W. for the remainder of the war. Here’s where it gets interesting: “If a plane … is about 70% of the way to safety, then the chance of being killed or captured is only 30%”. I read that to mean that there’s a sliding scale of danger based upon how close you are to enemy lines. The default assumption of the game is that you’re dogfighting directly over No Man’s Land, so a downed plane could end up being controlled by either side at equal odds. But the closer you are to your own lines the better your chances of getting out alive when you’re shot down.

So for my new campaign I’m proposing that at the end of each session any character still in the dungeon must roll to see if they escape No Man’s Land. The basic roll is 50%, corresponding to situations where the character level matches the dungeon level. Each level’s difference alters the chances by 10%. So a fourth level character on the third level of the dungeon has a 60% chance of getting out unscathed, while a first level PC on level 3 only has a 30% chance of making it. A roll of ‘01’ always succeeds and ‘00’ always fails. A character with a greater than 100% chance to survive can share the love with lesser compadres, lowering their own chances to 100% and distributing the extra points as they see fit. Fly, you fools!

If you fail the percentage roll to escape, then you are sent to the table below:

Results 4 through 7 on the chart allow the surviving members of the expedition to swear vengeance against the killer(s), as per the You Shall Be Avenged! rule in the Cinder draft house rules. Result 3 offers the same option if you make it out of the dungeon only to succumb to some lethal critical hit effect.

Anyone who is captured gets one chance to escape on their own power. The base chance is 1 in 6, increased to 2 in 6 if their character level is higher than the dungeon level of their prison. Treat successful escapes as result ‘1’ on the chart above. If more than one PC is trying to escape, all escape rolls are at 2 in 6 (3 in 6 for higher level characters). If you don’t escape you must be rescued or maybe ransomed. For each session of play that you languish in captivity or wander lost there’s a 1 in 6 chance of some worse fate befalling you.