The Tome of Mighty Magic 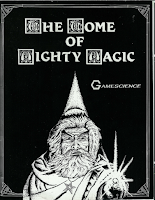 So here's a book that I don't think I've talked about on the ol' Gameblog before. The Tome of Mighty Magic is a 48 page book of spells. I own the Gamescience reprint from '92 but the original version was published in '82 by North Pole Publications, which was probably one of those garage outfits where the local game club decided to turn their house rules into a supplement. Twelve different contributors are listed, including what appears to be two couples. That's kinda neat, I think. I'm going to go ahead a quote the introduction in full:

In a hidden land on a distant plane dwelt three lords of incredible power. The wizard Aluap, an evil Arch-Mage, mastered the magics known to mortal men. He worshipped Death and kept his quota gleefully. Lord Eridor was a High Priest of Set. The third lord was Ida, an unusual elf of many talents. With his katana and wakishazi, as well as spells of various types, he defended the forests of the land in the name of the Druids' Council and the power they represented. Though the lords coexisted for many years, their conflicting goals eventually led to a showdown. In a battle which literally shook the earth beneath their feet, all three disappeared. Years later, while on a mission for his wizardly tutor Nimanril, the hobbit thief Tobelin Darver discovered some of Aluap's spell books among some abandoned ruins. Having an intense love of mysteries and ancient legends, Tobelin searched for many years before recovering the various religious scrolls and other writings which make up this text. He never told Nimanril of his find, for fear the most evil of the inscriptions would be destroyed. Instead, he gave them, along with a few scrolls he is beleived to have obtained from his tutor, to a temple of Thoth in return for enchanted scrolls with some of the spells. After many eons, we here at North Pole Publications, Inc., have obtained a copy of the text compiled by the scholarly priests, and the translation is as follows...

Apart from the bit at the end about North Pole Publications, doesn't that sound like the exact sort of thing that could happen in a long campaign? A hobbit finds some spellbooks from the Monty Haul era of the campaign. He can't do anything with them, but trades them to the Thothians for some scrolls he can use.

What follows the intro above is a list by level (and alphebetized within each level) of a couple hundred spells. Each spell has a brief stat block similar to the 1st edition AD&D format and then usually one to five lines of explanatory text. Spell levels range from 1 to 20, with levels fifteen to twenty being reserved as god-spells either used or directly granted by deities. This is the sort of book that I don't usually read from front to back, I just like to flip through and read random spells. They range from low level but useful (a spell that draws your dungeon map for you, for instance) to high level and ruinous (one 20th level attack spell erases the target from existance, as if they were never born). One handy 1st level spell summons a wooden crate that lasts until dispelled. (Start to Crate: .5 pages.) I love the idea of the loot crate being unintentionally dispelled in the middle of a fight, spilling the contents all over the battlefield.

My favorite spell so far has got to be My, What A Large Helmet You Are Wearing. It causes a foe's headdress to grow to comically large size, negatively affecting his performance in combat. The spell even comes with this nifty illo: 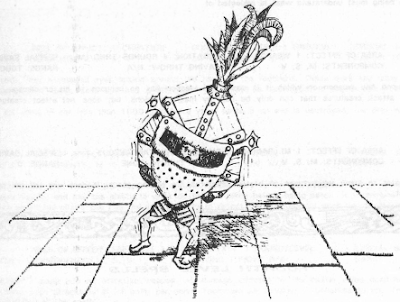 All in all, the The Tome of Mighty Magic reminds me of the free-wheeling nature of the Tunnels & Trolls approach to magic combined with the over-the-top craziness of the Arduin Grimoire. I could see myself using this book much as I do the Arduin material: as a way to lightly spice the standard D&D spell selection. This looks like one of those books that are great if the DM owns it but terrible if the players are allowed to use it willy-nilly. I wouldn't use The Tome as the main spellbook for a D&D campaign, but I wouldn't hesitate to drop a few spells from it onto scrolls or into some spellbooks. On the other hand, I would consider using Mighty Magic as the core spells for a campaign ran under The Field Guide to Encounters.