I started gaming as a snotnose kid back in the 80's. Over the years I've talked to a lot of gamers and past gamers who started as snotnose kids back in the 80's and most of the time I hear much the same story from them. We generally all started out with either the '81 or '83 Basic D&D rules. I started with Moldvay's near-flawless '81 edit but at least as many, if not more, got on the bandwagon with Mentzer's even-better-for-newbies '83 stuff. At some point thereafter the existence of Advanced 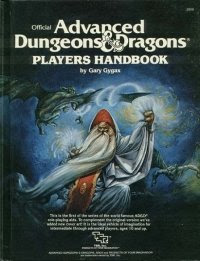 Dungeons & Dragons became known to us. We were all dumb kids in a hobby clearly originally aimed at a much older and more sophisticated audience, so we of course all had to get in on this 'Advanced' stuff.

The immediate problem, of course, is that AD&D was a LOT more game than Basic/Expert D&D, with a lot more fiddly bits. So we basically lied to ourselves. My group said we played AD&D. We had the AD&D books at the table. But whenever we found a mechanic we considered too cumbersome, we ignored it in favor of D&D as Tom Moldvay had taught us. AD&D initiative? Forget it. We used Basic D&D's super-simple group initiative rules. Material components? Naw. Our Basic D&D m-u's could cast spells without components, so why should our Advanced guys be saddled with that crap?

I'm painting with a broad brush here, but basically for an entire generation of D&D kids we tended to play Basic D&D but bolted on the bits from Advanced that we liked. More class and race options? Sign us up! Higher level spells? We'll take all you can spare! Two-handed swords that do an amazing 3d6 damage against big dudes? You know we want in on that action!

So this is where maybe OSRIC and Labyrinth Lord and such are missing the boat. As I recently proved in my own gaming group, not that many gamers want to play AD&D 1st edition as written. Hell, in a quarter century of gaming I've only met one guy that claimed his group played 1st edition AD&D exactly as written. On the other end of the spectrum, Basic/Expert type D&D can be a little too simplistic for some people. That goes right back to why my group and so many others hybridized the two games: we wanted to pick and choose a level of complexity between the two published extremes.

Changing gears for just a moment, is everyone familiar with 0one Games? (I think that's supposed to be pronounced "zero one" but I always want to say "oon".) They make some of the best dang maps you can buy. Their Caverns of Chaos is a gorgeous and utterly gameable homage to the original Caves of Chaos. And if you always wanted your own megadungeon but hate mapping, you really need to check out their series of super-mega Under the Mountain level maps. 0one is part of the YourGamesNow collective, which is a fabulous place to get gaming PDFs.

At least some of the 0one maps come with this great feature called "Rule the Dungeon!". You open up the PDF and it comes with these little clicky buttons. Let's say that the map is in color but you want to print in black & white. Click the right button and the color layers are hidden. If you like the map, but think the furniture in the rooms won't suit your uses, you can click to basically turn the furniture off. The basic layout of the map is always the same, but you can customize the presentation for your own specific needs. 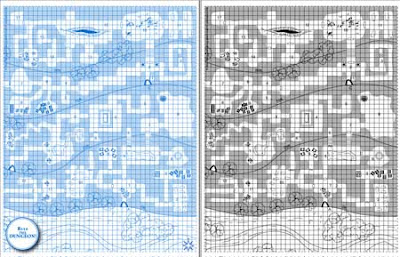 THAT is what I want from an OGL D&D pdf. Total effin' customizability. Give me a bigass checklist in the front of the file, like the ones that you can find in the back of old RoleMaster Companions. Allow me, through judicious checking and unchecking of little option boxes, to drill down to the exact version of D&D that suits my tastes. Give me the option of typing in additional text, or have the output of the program be in a form that I can easily edit. Then I can print out a copy for each player in a campaign and I will know that we're all on the exact same page. 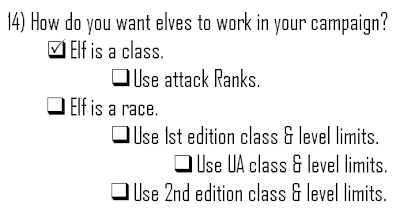 Somebody, please, steal this idea and run with it. Everybody already runs their own version of D&D. We're finally within reach of technology that should allow us to easily share our personal D&D's with all the other fans of the game.