A Calvalcade of Characters Sheets, part 1

Among my game crap I have a folder labeled "Favorite PCs". I thought it might be fun to scan in and share some old PCs of mine. 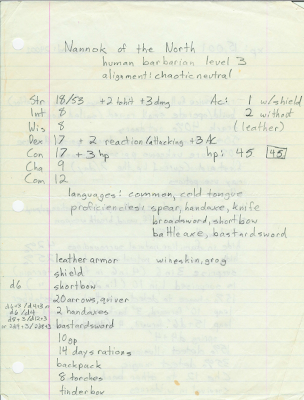 Nannok up there (not spelled Nanoc as a bit of a figleaf) is my oldest PC on file. He dates somewhere between '85 and '89, as he was an Unearthed Arcana-powered barbarian and my group stopped using the UA after 2nd edition came out. Nannok was the only 1st edition barbarian I've seen played from 0xp to 2nd level. That 6,001xp requirement for second level was too daunting a hill for most players to even try.

My schoolchum Dave Dalley was the DM for the adventures of Nannok, which were done as a one-on-one thing. I started out in some random hex up in the realm of the Frost Barbarians, the Viking equivalent region in the World of Greyhawk. I hexcrawled my way down to Ratik or the Bone March. Nannok biggest accomplishment was clearing out a small kobold lair single-handedly. I took the time to try to hatch the kobold eggs and raise the young. Only two of the poor things survived having a barbarian dude for a mom. I then resumed my adventuring career with 2 loyal kobold henchmen. Dave ruled the kobold would be true neutral alignment. Thus my barbarian unwittingly proved that nurture trumps nature in his World of Greyhawk.

Alexander got all his loot and xp in two runs in the mid-90's. The DM was Ray St. John, the dude who tricked a silver dragon in my Bandit Kingdoms campaign and wrecked my Atlantis campaign when his PC refused to wear pants. (Someday I really need to type up the latter story.) My buddy Pat was the only other guy for this particular outing. He played Stumpy, a standard-issue dwarf fighter/thief/arsehole. In our first outing the major villain was a vampire. I thought Ray was setting him up as the Big Bad of a major plot arc. No, we ended up fighting that mofo at the end of session two. Here we were, two first level nobodies, trying to stake a vampire in melee combat. It was pure luck that neither of us got drained.

Next up is one of my all time favorite PCs. For a brief period my Bandit Kingdoms campaign was run on a rotating DM basis, allowing me to play for a bit. Here's my dude, in all his 3-page glory. 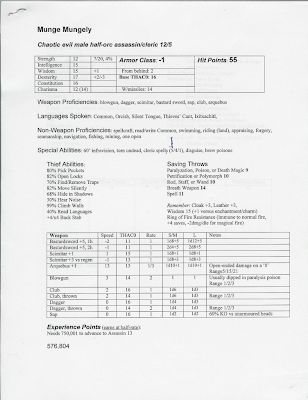 Lord Munge, as he styled himself, was a reject from the Horned Society, a Demogorgon-worshipping heretic. The diabolists of the Society were regular whipping boys in the campaign. 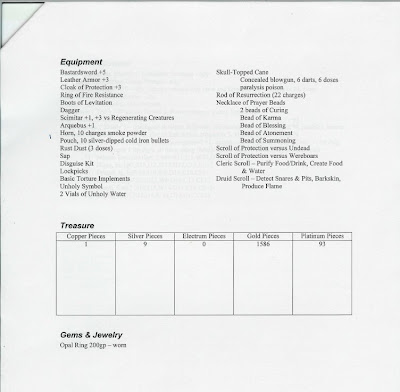 This is the most pimped-out character I ever played in D&D, apart from the odd high-level pregen or one-shot PC. 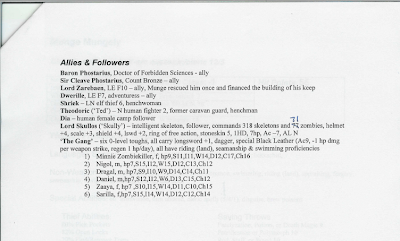 The Baron and Sir Cleave were the other regular PCs in the campaign. Lord Zarebean bought the farm in Doctor Wu's War of Vengeance and I promptly moved into his castle and assumed his title. Shriek actually started out play as a mongrelwoman henchwoman, but she died. My dude had too much pride to pay the cleric of another church for a resurrection, so I hired a magic-user to cast reincarnation instead. So my evil half-orc ended up with an elf sidekick. Lord Skullos was rescued from Vecna's Dimension of Undeath. In exchange for figuring out how to reattach his skull to a body, I put him to work leading my animated troops. The Gang previously worked for the Evil Paladin (like an Anti-Paladin, but more self-righteous and less explicable) until we killed that dude. Since I generally pay my troops rather than command through fear and mind control, they took my offer to change sides. Dia entered Lord Munge's employ when a tavern owner needed an assassination done but lacked hard coin. I agreed to take one of his bar wenches in lieu of the requisite gold.