This is my daughter.

Today I discovered Elizabeth on the couch holding her game boy, playing Pokemon, while in her lap a Scooby-Doo show was playing on her DVD. Meanwhile on the TV was some SpongeBob. The thing is, I'm pretty sure she was actually following both shows and playing the game without tuning out any of them. She can't pay attention to her old man long enough for him to wipe her nose, but she can follow two TV shows and a video game with no problem.
Later I made her a peanut butter and jelly sandwich. She lifted one slice of bread and informed me I had made it wrong. "The peanut butter goes on top." I flipped the sandwich over and she was pleased as punch.

Recently we got a good deal on a PlayStation 2 and Guitar Hero III. Now her favorite song in the whole world is "Slow Ride" by Fog Hat. She was like negative 26 years old when that song came out. Incidentally, I usually choose Lars Umlaut as my character when playing GH III. For those of you not familiar with the game, he looks like this: 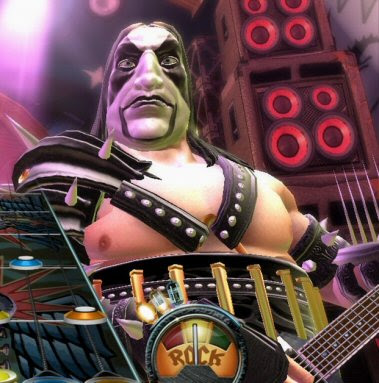 Elizabeth immediately declared him to be "Mogar", the rock 'n' roll persona adopted by Billy's dad in the episode "Battle of the Bands" from The Grim Adventures of Billy & Mandy. Here's the original Mogar:

The resemblance is striking, isn't it?