I feel like crap, but here have a map!

So I've been home sick today. So sick it wasn't even until this afternoon that I considered getting online. Too sick for the internet is pretty sick, at least for me. I spent couple hours this morning watching the second greatest movie in the history of cinema. There are parts of that flick that choke me up a little on a good day, but at a low ebb like today I just started crying my eyes out near the end.

On a totally unrelated note, here's the first draft of a map of the Five Seas region, the central area of my new campaign. 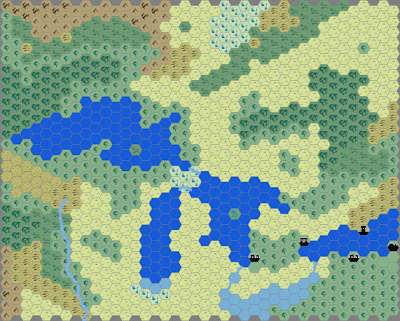 (Click to see a larger version.)
The scale is 1 hex equals 30 miles or so, I think. The settlements in the southeast corner mark the westernmost extension of Vinland. Any Vikings found west of those regions will be fellow adventurers, renegades, hardy traders, or explorers. The town on the map edge is Osvar, the largest Norse settlement this far west. The ruler there is the son of the founder of the settlement. He's a nasty little fellow whose favorite sport is troll-baiting. The tower is the domain of Randolf the Red, the greatest wizard in Vinland. He is rumored to possess both manrunes and godrunes, whatever that might mean. He's also known in wizard circles to be a bit of a perv for his fetishistic insistence on wearing pants, as opposed to the mumus, robes, and skirts so popular with normal, well-adjusted arcane masters. The village just east of the town and across the sea from the wizard's tower is called Ingvoll. It's little more than a trading post with a lawless Wild West vibe. The keep at the western terminus of the sea sits firmly on the border of Vestland, past that it's mostly unknown territory. Some sort of monster-infested cave system is rumored to be located near that keep. The village on the other side of the forest is inhabited and controlled by locals of some sort. I'm still working out the details.

I made the map with HexMapper, a little doodad you can download from here.