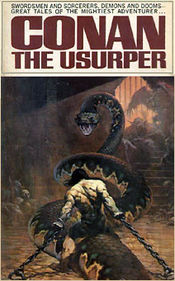 I was very pleased to be able to polish off Perry Rhodan #1: Mission Stardust over the weekend. The story didn't involve as much direct shotout/swordplay action as I prefer, but I enjoyed it nonetheless. I was surprised when Major Rhodan and his crew discovered human-like aliens from the Imperium. Could this be the inspiration for the first encounter between the Solomani and the Vilani in the Traveller setting? I found in my game room a copy of Conan the Buccaneer, one of the three Conan volumes I thought I was lacking. Conan the Warrior and Conan the Usurper are all that remains in completing my Ace paperback Conan collection. I think I'll re-read them all once I get through my current batch of paperback adventures. Today I started Black Vulmea's Vengeance, a pirate tale book also by Howard. Yar! Ol' REH must have really liked panthers, because as far as I can tell in every one of his stories at some point or another he compares the speed and dexterity of every single one of his heroes to panthers. In this book he pulls the panther ploy on page one! Could Panther Hunting be the Howard equivalent of Clench Racing?

As I was messing about in my game room I made a second discovery. I found a copy of To Duel With Dragons, the second module for Iron Heroes. I could've sworn that I had purchased the first such volume, Song of the Blade, but it looks like after I finished pawing through all the IH book at the Dragon's Table I ended up carrying the wrong book to the counter. No real harm done, I suppose, other than owning a 4th level module for a game when I had intended to buy the 1st level adventure. I fully intended to purchase both eventually.