I had to do it

A couple days ago Chris Sims posted the following Doom Patrol panel over at his Invincible Super-Blog: 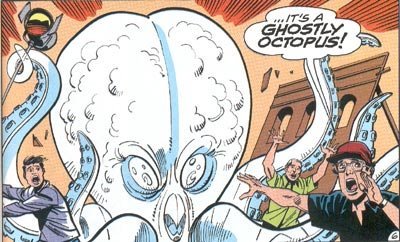 Looks to me like a perfect opportunity for another episode of Slapdash Template Theater!

GHOSTLY GIANT OCTOPUS
Large Undead (Aquatic, Incorporeal)
Hit Dice: 8d12+3 (55 hp)
Initiative: +3
Speed:20 ft. (4 squares), swim 30 ft., fly 30 ft. (perfect maneuverability)
Armor Class: 19 (–1 size, +3 Dex, +7 natural), touch 12, flat-footed 16, manifesting 13
Base Attack/Grapple:+6/+17
Attack: Tentacle +12 melee (1d4+7)
Full Attack: 8 tentacles +12 melee (1d4+7) and bite +6 melee (1d8+4)
Space/Reach:10 ft./10 ft. (20 ft. with tentacle)
Special Attacks:Improved grab, constrict, Corrupting Touch, Draining Touch, Manifestation
Special Qualities: Ink cloud, jet, low-light vision, Turn Resistance, Rejuvenation
Saves: Fort +6, Ref +9, Will +2
Abilities: Str 24, Dex 17, Con --, Int 2, Wis 10, Cha 11
Skills: Escape Artist +13, Hide +21, Listen +11, Search +8, Spot +13, Swim +15
Feats: Alertness, Skill Focus (Hide), Toughness
Environment: Warm aquatic
Organization: Solitary, gang (2–4), or mob (7–12).
Challenge Rating: 11
Advancement: 9–12 HD (Large); 13–24 HD (Huge)
Level Adjustment: —
Combat
An opponent can attack a giant octopus’s tentacles with a sunder attempt as if they were weapons. A giant octopus’s tentacles have 10 hit points each. If a giant octopus is currently grappling a target with the tentacle that is being attacked, it usually uses another limb to make its attack of opportunity against the opponent making the sunder attempt. Severing one of a giant octopus’s tentacles deals 5 points of damage to the creature. A giant octopus usually withdraws from combat if it loses four tentacles. The creature regrows severed limbs in 1d10+10 days.
A ghost retains all the attacks of the base creature, although those relying on physical contact do not affect creatures that are not ethereal. A ghost retains all the special attacks of the base creature, although those relying on physical contact do not affect nonethereal creatures.
Constrict (Ex): A giant octopus deals 2d8+6 points of damage with a successful grapple check.
Improved Grab (Ex): To use this ability, a giant octopus must hit an opponent of any size with a tentacle attack. It can then attempt to start a grapple as a free action without provoking an attack of opportunity. If it wins the grapple check, it establishes a hold and can constrict.
Ink Cloud (Ex): A giant octopus can emit a cloud of jet-black ink 20 feet high by 20 feet wide by 20 feet long once per minute as a free action. The cloud provides total concealment, which the octopus normally uses to escape a losing fight. All vision within the cloud is obscured.
Jet (Ex): A giant octopus can jet backward once per round as a full-round action, at a speed of 200 feet. It must move in a straight line, but does not provoke attacks of opportunity while jetting.
Corrupting Touch (Su): A ghost that hits a living target with its incorporeal touch attack deals 1d6 points of damage. Against ethereal opponents, it adds its Strength modifier to attack and damage rolls. Against nonethereal opponents, it adds its Dexterity modifier to attack rolls only.
Draining Touch (Su): A ghost that hits a living target with its incorporeal touch attack drains 1d4 points from any one ability score it selects. On each such successful attack, the ghost heals 5 points of damage to itself. Against ethereal opponents, it adds its Strength modifier to attack rolls only. Against nonethereal opponents, it adds its Dexterity modifier to attack rolls only.
Manifestation (Su): A ghost dwells on the Ethereal Plane and, as an ethereal creature, it cannot affect or be affected by anything in the material world. When a ghost manifests, it partly enters the Material Plane and becomes visible but incorporeal on the Material Plane. A manifested ghost can be harmed only by other incorporeal creatures, magic weapons, or spells, with a 50% chance to ignore any damage from a corporeal source. A manifested ghost can pass through solid objects at will, and its own attacks pass through armor. A manifested ghost always moves silently. A manifested ghost can strike with its touch attack. A manifested ghost remains partially on the Ethereal Plane, where is it not incorporeal. A manifested ghost can be attacked by opponents on either the Material Plane or the Ethereal Plane. The ghost’s incorporeality helps protect it from foes on the Material Plane, but not from foes on the Ethereal Plane.
A ghost has two home planes, the Material Plane and the Ethereal Plane. It is not considered extraplanar when on either of these planes.
Rejuvenation (Su): In most cases, it’s difficult to destroy a ghost through simple combat: The "destroyed" spirit will often restore itself in 2d4 days. Even the most powerful spells are usually only temporary solutions. A ghost that would otherwise be destroyed returns to its old haunts with a successful level check (1d20 + ghost’s HD) against DC 16. As a rule, the only way to get rid of a ghost for sure is to determine the reason for its existence and set right whatever prevents it from resting in peace. The exact means varies with each spirit and may require a good deal of research.
Turn Resistance (Ex): A ghost has +4 turn resistance.
Skills: A giant octopus also can squeeze and contort its body, giving it a +10 racial bonus on Escape Artist checks. A giant octopus has a +8 racial bonus on any Swim check to perform some special action or avoid a hazard. It can always choose to take 10 on a Swim check, even if distracted or endangered. It can use the run action while swimming, provided it swims in a straight line.
Ghosts have a +8 racial bonus on Hide, Listen, Search, and Spot checks.

Since an average Giant Octupus has less than the required 6 Charisma for a ghost, I added +1 CR to the base creature and gave it the Elite Array. This allowed me to jack up the Cha to the required level.