Here comes the Cavalry! Or not. 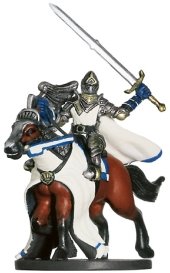 Quiz time, folks! How many figures in the D&D Minis line are mounted cavalry? Times up, pencils down. Out of eight releases of 60 figures each, only 8 of the little suckers are cavalry. And fully half of those appeared in the most recent set. Extra credit: If you want a figure to represent your PC knight on his horsey, how many choices do you get? Two, but only if you count the Blackguard On Nightmare as a viable option. Otherwise you are stuck with one lousey Mounted Paladin. What is going on here? Back in the days before so-called Collectible Whatever Games every fantasy army fielded huge troops of mounted figures. Heck, some of the best bad guys I've ever seen sculpted are the Chaos Knights from Citadel/Games Workshop. Is the armored knight on steed not cool with the kids these days? Is it a mechanical issue? No version of D&D has ever done as good a job handling mounted combat as Pendragon, and maybe there are too many other better options for the 3.5 fighter types. Am I the only one who thinks it odd that the mounted warrior is so under-represented in DDM? Heck, I got better choices when picking kobolds than when picking knights. Something's wrong with that.

Here's my opinion: Wizards should put out a DDM release emphasizing mounted combatants, even moreso than the most recent batch. Include a dismounted version of each rider in the set. In tandem with this release Mike Mearls or some other mechanical wonk should be given the task of writing more oomph! into the mounted combat rules of both the minis game and the RPG. I want to get medieval on some orc asses and the present state of affairs is not conducive to that goal.