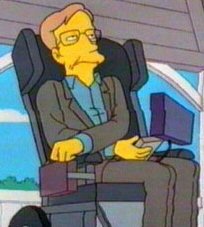 I kid you not. Professor Hawking is an accomplished man. I'd call him a Renaissance man, but he's more like a transhuman man-mind from some future century. Sure, we all know he's one of the premier minds in physics. And many of you may be aware that he's the only person to ever play themselves on a Star Trek show. Of course we're all familiar with his work as a crime-fighting cyborg. But did you know that in his youth he designed games?

Later on, in my teens, I built model airplanes and boats. I was never very good with my hands, but I did this with my school friend John McClenahan, who was much better and whose father had a workshop in their house. My aim was always to build working models that I could control. I think it was the same drive that led me to invent a series of very complicated games with another school friend, Roger Ferneyhough. There was a manufacturing game, complete with factories in which units of different colors were made, roads and railways on which they were carried, and a stock market. There was a war game, played on a board of four thousand squares, and even a feudal game, in which each player was a whole dynasty, with a family tree.

--from Black Holes and Baby Universes & Other Essays

Don't those games sound nifty? One of the greatest minds in history, designing economic simulations, multigenerational medieval epics, and 4,000 cell wargames! If he wasn't busy unlocking the secrets of the universe I'd start a petition drive to get him designing games again.