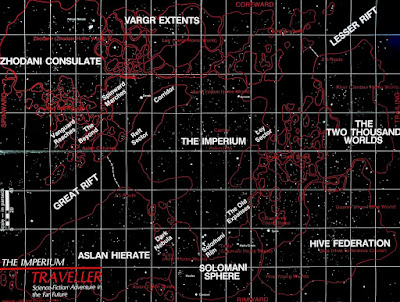 So this is the map of the setting used in most Traveller products. Each white rectangle on that map is 24 parsecs wide by 32 parsecs tall (78.2775 light years by 104.37 light years, if you'd prefer). Those white rectangles are called sectors in the terminology of the game and each sector typically contains 3 or 4 hundred worlds you can visit, all of which have been sketched out using one of the greatest game mechanics in RPG history, the Universal World Profile. There's enough material on that level to riff a whole campaign out of a sector's worth of UWPs. The Imperial Fringe does just that. The PCs are hired to survey the Spinward Marches sector.)
Even with all those worlds and all that space, in the greater scheme of things that map doesn't really cover much of the galaxy. Check this out: 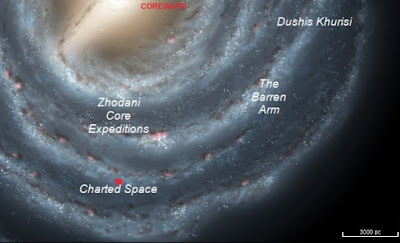 That little red blob labeled Charted Space? That's the map above shown in scale to the Milky Way. Thanks to Joshua Bell and his great resource travellermap.com for that view.
At 256 parsecs tall by 384 parsecs wide, the Charted Space map fits neatly into one hex on this map:

This is the board for Federation & Empire, the strategic board game for Star Fleet Battles. The round blue area is Federation space. The grey area down and to the left is Klingon territory and the grey to the right is the Romulan Star Empire. The little dark bit between the three at the bottom of the map is where the Tholians weave their webs.
Each hex on that map is 500 parsecs across. This is really convenient in that the galaxy is maybe that thick along the spiral arms, allowing a 2-d map to accurately describe a volume of 3-d space. However, I've always been slightly annoyed by this scale. Here's why.
Star Fleet Battles is a fork of the Star Trek universe, incorporating the Original Series, the Animated Series, and the Star Trek Star Fleet Technical Manual by Franz Joseph. The latter is one of the truly great examples of fandom lore. One of the things that Franz Joseph does is define what the heck a Warp Factor is. Turns out that if you cube the number of the Warp Factor, that gives you the speed in terms of units of C, e.g. Warp Factor 6 (the safe cruising speed of the original USS Enterprise) is 6 x 6 x 6 C, or 216 times the speed of light. That means, according to this source at least and my own limited arithmetical skill, it would take Captain Kirk's Funtime Pals over seven years to cross a single Federation & Empire hex. Seeing as how each turn is six months, my guess is that the F&E designers ignore Franz Joseph on this point.
Since Federation & Empire first came out in the 1980's, the lovely folks at Amarillo Design Bureau (who make SFB and F&E) have expanded their universe even more. There's now an adjacent area of space, the ominously titled Omega Sector, with 20+ new polities and hundreds of more spaceships you can blow up. They've also mapped out at least one Magellanic Cloud. But my favorite expansion to Amarillo Design Bureau's expansion of the Star Trek universe is this one: 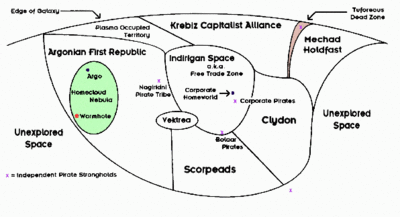 Companion Games came out of the blue in 1993 or so with it's own chunk of the SFB universe, located on the opposite side of the galaxy. They called it the Far Side and had their own races and spaceships, completely compatible with Star Fleet Battles. As a non-canonical supplement to a non-canonical and super duper complicated* Star Trek game, the Companion Games material didn't exactly set the world on fire. But I'm a sucker for weird little corners of fandom like this. In full SFB tradition, each spot on that map has its own unique navy with its own special weapons. How different ships with different weird subsystems that only one species possess interact is half the fun of Star Fleet Battles.
Anyway, I recently learned that the Amarillo have started mapping out the whole dang galaxy, so I used my limited photoshoppery skills to add the Far Side to the official map: 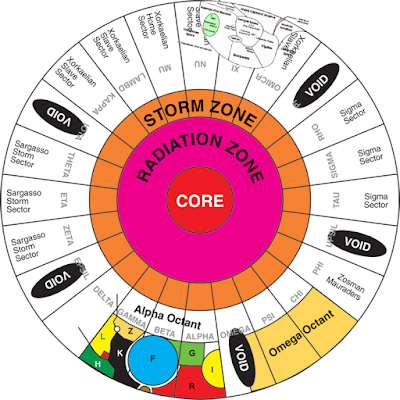 The blue circle near the bottom is the Federation. What is labeled "Alpha Octant" is basically the Federation & Empire map projected onto a polar coordinate system. It looks like the Far Side overlaps several Xorkaelian Slave Sectors. I don't know who these Xorkaelian's are, but they obviously aren't nice people. Now I am imaging a war of conquest as the Far Siders, used to fighting among themselves for ages, must unite or be crushed by the Xorkaelian menace. I wouldn't use SFB to find out what happens next. My opinion of SFB is pretty much the opposite of Companion Games: I love the spaceships, but can't deal with the game mechanics. There are a dozen or more ship-to-ship games that are faster and more explodey than SFB. Starmada is one of my favorites, though I haven't played the last couple of editions.
*Seriously, you may think modern D&D is complicated, but full-blown all-the-bells-and-whistles SFB blows it out of the ding dang water. The only comparable non-computerized game I know is Advanced Squad Leader.