turns out there are RPGs that don't involve orcs

So this morning I got to participate in one of the playtest sessions for Zak's superhero game.  I quite liked a lot of what I saw.  Chargen involved a combination of random roll and choices.  The mechanics were similar to FASERIP but replaced the bigass d100 color chart with dice for stats.  (Like Savage Worlds, my Toughness is a d6, my Agility a d8, etc.).  I'm not sure I followed how initiative worked but the GM managed it so I didn't much care. 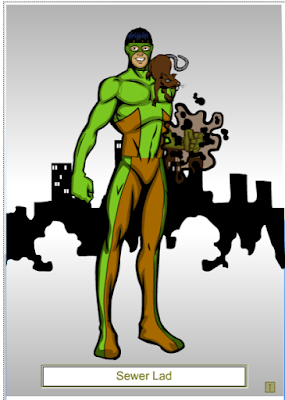 His two superpowers are summoning (but not really controlling) lots and lots of rats and his deadly Sewer Touch, the latter of which he is very reluctant to use.  It can, like, melt your face off, man.  I did my best to only threaten to use it in dire circumstances, but I ended up have to corrode a bit of the villain Brick.

Sewer Lad is also a not-particularly-good martial artist and a leading authority on rat biology who works in the small and under-funded Rat House in the City Zoo.  His pal is Tad, a sewer maintenance guy with a big wrench and a heart of gold.

Sewer Lad teamed up with the Arcanist, some sort of dark emo mindbender, to fight the villains Mindvoid, Brick, and Nullifier. I had a great time. 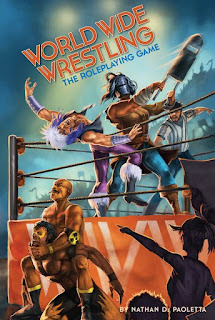 Later this week I'll be trying out the World Wide Wrestling rpg.  This is a Powered by the Apocalypse type story game, so it's a bit out of my usual sort of thing.  It's the first pro wrestling RPG that I like.

If you're interested in playing in the campaign (assuming we don't all hate it after one session), the game is being organized on the DIY RPG discord.  If you're not a member there, just hit me up via email (jrients at the gmail) or twitter or something and I'll send you an invite.