OSR Guide For The Perplexed Questionnaire

OSR Guide For The Perplexed Questionnaire
this was Zak's idea, by the way

1. One article or blog entry that exemplifies the best of the Old School Renaissance for me:

Joesky the Dungeon Brawler's A TABLE FOR THE BAD GUYS!!!!!!!.  Joesky's aesthetic may not be for everyone, but I read his work as the comical presentation of a serious attempt to engage with the big questions of the scene.

2. My favorite piece of OSR wisdom/advice/snark:

Oh, man, the compilation of the first four issues of Fight On! is so sweet, my friends.

4. My favorite house rule (by someone else):

Liquid Courage
Once per session, characters who possess strong alcoholic beverages may partake of them to gain an additional 1D6 hit points that lasts for the duration of the next combat, after which these “spiritous hit points” disappear should they not have already been used up in the combat.

I'm been sitting here struggling with how to answer this one.  I think the scene kinda bubbled up into existence around me.  One day I just noticed some overlap between the people at the OD&D forums and Dragonsfoot and Knights & Knaves.  Some of these people didn't just want to run the old games exactly as they had in their youths.  Then stuff like Castles & Crusades and Swords & Wizardry and Labyrinth Lord and OSRIC helped imagine a path forward.  At some point there was just a critical mass of people who wanted to take the old stuff in new directions.

7. Best place to talk to other OSR gamers:

Despite it's limitations, I've been digging twitter recently.  If you're there and I don't follow you, please let me know!

8. Other places I might be found hanging out talking games:

In the face of the Google+ sunset, I'm trying mewe.com, but I'm not sure if I get it yet.  I'm also trying http://diyrpg.freeforums.net/ though I'm not convinced going back to message boards is the right solution.

Level limits for non-humans are good and fun.

Well, the only non-old school game I can see on my shelves right now is Nathan D. Paoletta's World Wide Wrestling RPG, a Powered by the Apocalypse story game that takes the kayfabe side of wrestling seriously.  But I haven't played it.

Gygax and Arneson hit on something magical, but there's no good reason why that magical needs to be bottle and sold to us by a big corporation.  There's no reason why a central committee needs to set an agenda for the hobby.  As a kid new to the hobby I didn't understand how slavishly lapping up the offerings of TSR shaped my view of what D&D could be, what behaviors (good or ill) it reinforced, what doors it closed.  Fantasy roleplaying is an open-ended, artistic, mythological activity between human beings.  We don't need an official imprimatur to make that work, in fact such approval inevitable cuts us off from some avenues of exploration.  Within the vague concept of "games like this," the OSR is a diffuse, non-centralized, network of individual exploration and group interchange, respecting the right of the individual soul to dream while keeping us connected to each other.

Also, I am not over wizards and dragons and never will be.

12. Two other cool OSR things you should know about that I haven’t named yet:

The FLAILSNAILS Conventions and the network of games that resulted from them continue to be one of the coolest bits of nerdery I have ever had the pleasure to participate in.  And I love the attitude of good faith and trust in our fellow players that lie behind them.

Random Character Advancement Charts are lots of fun.  Here's a central storehouse of them, but their are others out there.

13. If I could read but one other RPG blog but my own it would be:

Dang.  This is the hardest question to answer of the bunch.  As a practical matter, I steal more from Zak S. than anyone else, so I guess I gotta go with dndwithpornstars.blogspot.com.

Nothing.  I need to get my shit together.

16. I don't care whether you use ascending or descending AC because:

I can always just ask you what armor you are wearing and what your Dex score is, or tell you what you need to roll to-hit.

17. The OSRest picture I could post on short notice: 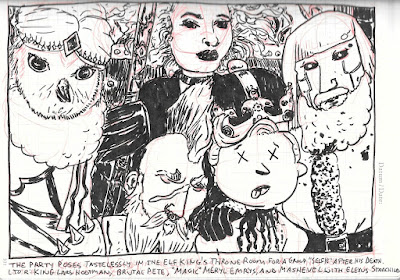 This is a player-made illo of a key point in my last campaign, which, for a number of reasons, would never have happened (the whole campaign, not just this moment) without the old school scene.  Illo by Nick Kuntz, one of the many fine people who took the time to make the Vyzor campaign something special.