More on the Ring 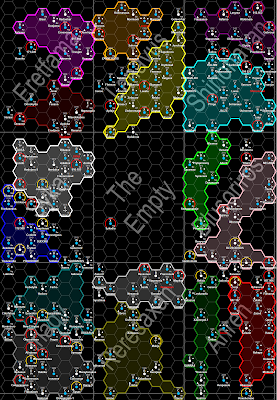 Cool guy Evan Elkins made several improved versions of my map of the Ring.  Thanks, Evan!  I especially like this one that shows the borders of the interstellar polities and the names of the subsectors.

The borders make it a lot easier for me to notice a few details about the multisystem governments of the Ring.  A big one is the fact that fully half of them do not possess a class A starport.  (Starport type is the letter above the planet in the center of the hex.  A is the best.  An X indicates no starport whatsoever.)  This lack of class A starports is super interesting to me, as class A's are the only starports with facilities for the construction of starships.

So where do these poor governments get all their jump capable vessels?  Do they buy them from other interstellar polities?  If so, which ones?  Do the sellers limit the sort of naval technologies they'll make available to others?  Or do the pocket empires that lack a class A buy all their ships from the two non-aligned worlds with class A starports?  A third possibility is that they make do with rickety old fleets from a previous era.  Some combination of all three of these possibilities is probably the best answer.  But one of the things I love about Traveller is how the random distribution of something like starports suggests ramifications for the campaign.

Another thing to glance at is the presence of naval bases, which take the form of a little star in the upper left of the hex.  Most of the governments of the Ring have either one or two naval bases.  So that's the norm for the region.  But two of them have no naval bases whatsoever.  They also don't have a class A starport.  I think it is fair to ask whether or not these two governments even have their own navies.  If not, what does that mean for the campaign?  If they do have a navy, why don't they have a base of some sort?  Whatever the answer, it should provide some interesting material for the setting.

Then there's the blue-outlined and white-outlined regions in the middle left subsector.  They possess 3 and 4 naval bases respectively.  Having more naval bases than average seems like an indicator of possible belligerency.  That looks like the section of the Ring with the biggest military build up, so maybe those two neighbors have a long history of interstellar warfare.