how to be a half-orc

So this is an attempt to use the Random Advancement system as a method for implementing new races.

In order to play a half-orc roll up stats and pick one of the human classes: Warrior (fighter), Wizard (M-U), Thief, or Cleric.  If you have at least a 9 in the Prime Requisite for the class and a Charisma score of 12 or less, you can opt to play a Half-Orc of that class.  You can do the same for Zak's Barbarian class, but you need a Str and Con both of 9 or better. 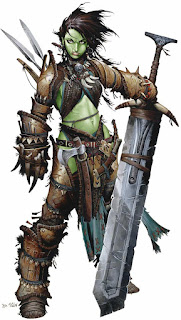 Every time you are entitled to two or more rolls on the advancement charts, exchange one of those rolls instead for a roll on this chart.  Initially, you won't be much different from a human of your selected class, because you get no starting half-orc abilities.  But you will eventually grow into your half-orciness.

01  You get nothing.  Being a half-orc really sucks sometimes.

53-66  If you belong to a spell casting class then you gain a spell slot as normal.  If not, you gain the ability to tell enemy spellcasters to get bent:  You can shrug off any one incoming magical attack or effect.  If it is an area effect it can still affect others around you.  This ability works just once.

67  Thick skull.  Any time you would be knocked out by a blow to the head, killed by a head critical, etc., you get a saving throw versus Death Ray to avoid it.  Reroll if you get this result again.

68-69  You lose one point of Charisma vis-a-vis humans, demihumans, faeries, angels, and other such good guys, but gain +2 points of Charisma when dealing with monsters and bad guys.  E.g. if you had a 9 Cha and rolled this, your Charisma is now 8/11.  If you drop below 3 Charisma you can no longer find any place in polite society.  If you gain 18 Charisma with respect to monsters, you find yourself propositioned regularly by all sorts of horrible creatures.  Reroll if this result would lower you to zero or raise you above 18. 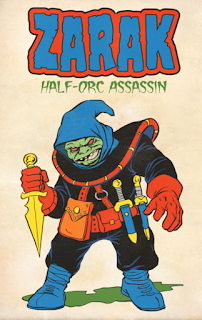 70-71  Master of ambushes.  Any time you have the advantage of surprise a natural to-hit roll of 20 will outright slay any foe that possesses internal organs/that is subject to critical hits.  If you roll this again your 'ambush range' becomes 19-20, etc.

72  You can declare one magic weapon, shield, suit of armor, or helmet to be made by the Orc Wizard-Smiths of Old, providing the provenance of the item has not already been established.  This item can now be used by orcs and half-orcs of any class and the DM must roll on the Miscellaneous Magic charts to give it additional powers that are only usable by such characters.  You may make such a declaration only once.  Reroll if you get this result again and have not used it yet.

73-74  The next time you fight a bunch of humanoids of bugbear size or less, you can recruit the sole survivor of the encounter .  You know, that one remaining baddie that always causes arguments about whether to kill them or tie them up or whatever?  That dude is now your loyal henchweenie.  Use the figher charts to track XP for them (assuming a 2 hit die gnoll is a 2nd level fighter, for instance), except for kobolds, xvarts, and goblins.  Treat them as 1st level thieves.  You can reuse this as many times as you reroll this result, up to your Cha limit for henchmen.  Reroll this result after that.

75-76  Orcs are fierce.  Orcs are violent.  Orcs are mean.  Orcs are also incredibly lazy.  Any time you have to do a non-combat task more complicated than digging a ditch, make an Intelligence check to find a way to get it done for less effort.  Reduce the time on task or the materials needed by 50%.  Reroll if you get this result again.

77  You have found and mastered a legendary Orcish Double Axe.  You may attack twice per round for 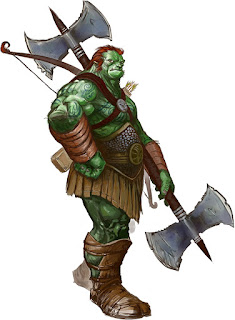 normal battle axe damage each time, but at -2 to-hit for each attack.  If rolled again, you lose the penalty.  Reroll if you get this result a third time.

78-79  Where there's a whip, there's a way.  Any time someone beats you with a whip, you take no damage.  Instead, you become invigorated as if you had an 18 Constitution for purposes of initiating or staying on some arduous task.  Reroll if you get this result again or if you already have an 18 Con.

80  Given an armful of old leather, scrap metal, and bits of wood, you can put together a suit of improvised armor.  You need one turn to make the equivalent of standard leather armor, 6 turns to make the equivalent of chain, and 3 days to make plate.  Any sort of critical hit, a blow by something of giant strength, or a fall of greater than 10' shatters the armor.  Reroll if you get this result again.

81-82  Half-orcs tend to make their way through the world by walking on the corpses of their friends.  You may save your bacon from death, level drain, or any other imminent doom by allowing another PC to take the fall.  This can be used in any situation where cleverness and treachery can be brought to bear.  You can do this only once, but once is enough.

83-85  Your beady little eyes have adjusted to the gloom of dungeons.  You gain 60' infravision.  If you roll this again you gain +1 to any sort of search check (such as finding secret doors, locating traps) when in the twilight world below the surface.  Reroll if you get this result a third time.

85  You're so resourceful and vicious in combat that nearly any object is a deadly weapon in your hands.  It will do d6 damage with no to-hit penalty and can probably be thrown like a hand axe.  Every time you do damage with it there is a 50% chance the item breaks.  It will take you a whole round to retrieve another object.  Reroll if you get this result again.

86-87  Once per session you can consume the flesh of any slain enemy except undead to regain d6 hit points.  This horrid feast takes 1 turn and freaks out most non-orcish NPCs in the party.  Increase die size to d8, d10, d12, and d20 with subsequent rolls.  Reroll if you get this result again after that.

88  You get some wicked sick tattoos and/or ritual scarring.  Humans, demi-humans, and humanoids of bugbear size or smaller are -1 morale when facing you in melee.  Other than orcs.  They might dig the ink, but they aren't scared of it.  Reroll if you get this result again.

89  You know how to talk to monsters.  If you don't know orcish, you gain that language.  Otherwise pick any monster tongue.

92  You gain the ability to fashion a cup out of the skull of an enemy you have slain.  This requires a 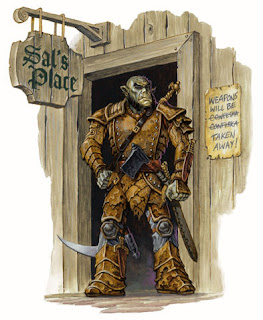 sharp tool, 100gp in materials, and 8 hours of chanting.  If you pour a potion into this cup then drink it, the duration of the potion is doubled.  Instantaneous effects like healing are not altered in any way.  If you pour poison into the cup you save at +2.  The skull can be used a number of times equal to the hit dice of the creature.  Half or partial hit dice don't count.  (Only wimps drink from kobold skulls.)  You may only have one such cup at a time and the powers work for no one else save a blood relative.  Reroll if you get this result again.

95 Everyone knows that dungeon doors hold some sort of animus against surface dwellers.  That's why monsters seem to be able to open them easily but PCs have to roll.  You confuse doors.  +1 to Open Door rolls.  Reroll if this would take you past a 5 in 6 chance to open.

96-97  Your let your wild side out.  Roll on the Barbarian chart.  If you already are a Barbarian, roll twice and take your pick of the two.

98-99  Those fangs aren't just for show.  Once per combat you may surprise a foe with a bonus bite attack.  You get +2 to hit and do d4 damage (plus Str bonus, if any).  Reroll if you get this result again.

100  The taint of chaos grows inside you.  Roll on a handy random mutation chart.