The sensational character find of 2015!

White Dwarf #46 (October 1983) isn't one of my favorite issues of that venerable gaming magazine, but it does have some neat stuff in it.  The three Traveller patrons are quite nice.  There's an installment of Irilian, the AD&D city that came out in bits and pieces.  But as I was flipping through the issue last night I spotted something in an add that I hadn't noticed before.

I love the ads in White Dwarf.  Part of it is drooling over products I never saw in the U.S., part of it is the slightly different feel of fantasy gaming in Britain, a little more of a black humor edge.  And part of it is just plain old geeky Anglophilia, as I delight at seeing game companies and stores with addresses in places like Lancashire and Manchester.  That's ordinary stuff for folks living in Britain, but a little part of me will never quite stop believing in a magical land on the other side of the sea.

Anyway, here's the advertisement I took a second look at last night: 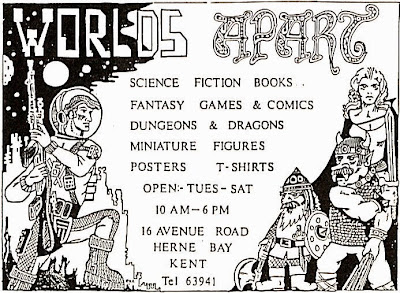 Ah, yeah.  That's the ticket.  A nerd shop with a cool name and a super rad logo.  You got planets lurking in the background, your basic spaceman with a bubble helmet and laser rifle, a comely sorceress type, Axebeard Rustbutt the Dwarf, and...

Waitaminute, is that an orc with an Tom Selleck moustache?!?

Maybe not an orc, but some sort of muscled-up  humanoid at least.  The ears are pointy but no elf I know has fangs like that.  If he isn't an orc, he at least has me asking why so few orcs are depicted with sweet-as-heck facial hair.

"Worlds Apart" and this art would make for a neat add for a sci-fi fantasy campaign.  Something like this: 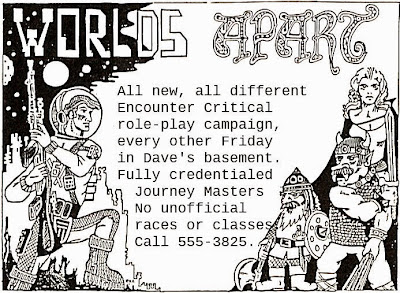 Jeez.  Now I want to get my table into playing some Encounter Critical.  Also, while scanning the cover and the ad for this post I think my hand slipped and I may have accidentally scanned and uploaded my favorite article from this issue.  Oopsie.