We live in a visual age.  The advent of photography and cinematography plus earlier advances in the reproduction of images followed by the invention of the world wide web have resulted in a culture where we share images with one another constantly.  As a result, some guy in LA can immediately share the paintings he's created with the entire world.  While some other dude in the midwest can have a tumblr account that is 99% him recirculating images other people have created and posted.  Earlier ages would have called these activities miracles, but for us they are now routine components of our lives.

Now I am not a luddite by nature.  I like having a lever in the kitchen that causes fresh, clean water to erupt from a spigot, for example.  However, we live in a fallen world where every boon has its unintended consequences.  For us, one of those consequences is the way that our hyper-visualized culture can ossify parts of our imagination.  Allow me to demonstrate: take a moment to think about Frankenstein's monster.  I feel pretty confident you could immediately call up an image of the monstrous star of books, comics, films, etc.  And I also feel pretty confident that most of you imagined something like this.  The original novel by Mary Shelley has almost no description of the creature.  You can just about count on one hand the number of sentences that describe him.  And none of them mention green skin, bolts in the neck or a flat-top head at all.  Our collective imagination relies on the visual of the 1931 Universal Pictures film.

Which is not to say that I am arguing that you should all read the original 1818 novel (you should, but I'm not arguing that here) nor am I trying to argue that the yellow-eyed creature with translucent skin portrayed therein is superior to Boris Karloff all dolled up by make-up man Jake Pierce.  The latter version continues to haunt us for a reason.  However, I do think we should take a moment and reflect on what our hyper-visual culture does to our games.

Particularly, I am thinking about how monster books or chapters are put together.  This thing we do where every monster comes with a glamour shot is bugging me today.  Are we not doing to ourselves what the 1931 Frankenstein did to us?  For example, in my crazy brain I think I know exactly what a level 4 shambling krenshar looks like, because when the krenshar appeared in 3.0 the nice folks at Wizards kindly supplied us with this illo: 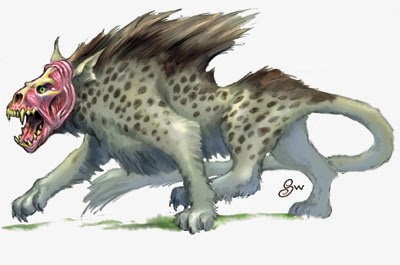 This monster is a hyaena-leopard thing that shows you its own skull before you die.  I think that's a pretty effin' cool concept.  But I'm not sure the art direction here delivers that concept.  In fact, I think this picture takes away rather than adds to freaky-deakiness of the krenshar.  What could be a monster instead becomes an interesting specimen from a wildlife documentary.

You know who did this crap right?  Sandy Peterson and the crew at Chaosium back in the 1983 Call of Cthulhu boxed set.  Dig it: 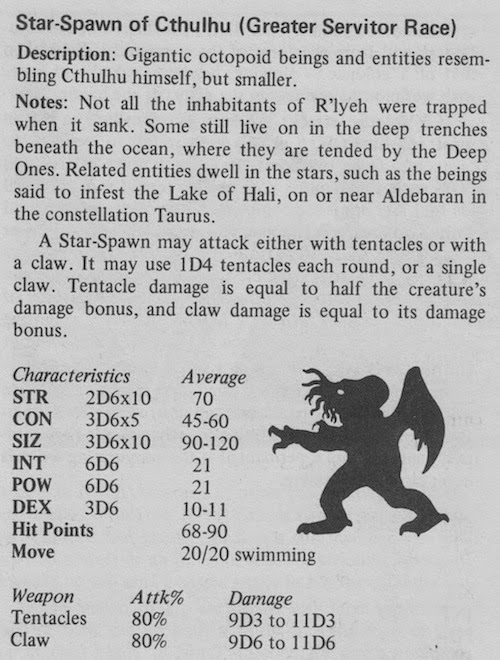 That little black silhouette suggests rather than defines the look of the Star-Spawn.  I would go so far as to say it raises as many questions as it answers.  What color is this creature?  A lurid green?  Jaundiced yellow?  Or perhaps it's pale white and shot through with creepily visible red veins?  That knobby head, is that an exposed brain, maybe?  Does this creature have a mouth under those tentacles?  If so, is it a slobbering, fanged maw or a snapping beak or a puss-dripping sphincter?  Etc, etc.

However, there are some things that I think you can do to put a little but of that frisson back into a game that doesn't involve chucking the beloved canonical monsters.  I'll try to cover those in my next blog entry.  Feel free to yell at me on G+ if I haven't posted by Saturday.