Okay, let’s take this baby out for a test spin.  I’m going to make a couple of NPCs in both my beloved ‘81 Basic/Expert rules and this new-fangled edition, just to see what happens.

I’m going to base my two NPCs on this illo by comic artist Dave Cockrum. 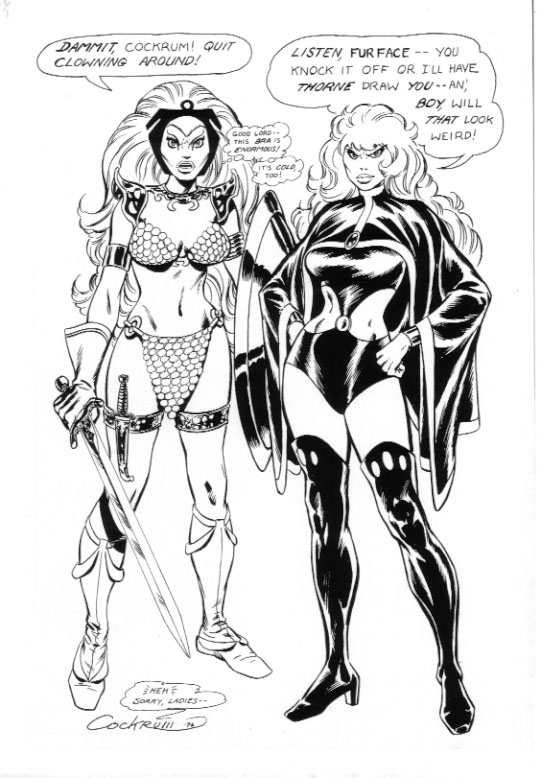 We’ll start with the BX versions.  I’m going to use the standard array (15, 14, 13, 12, 10, 8 arranged to taste) rather than rolling dice because my dice bag is in the other room and I’m feeling lazy.  Besides, the standard array is one of the WotC folks’ better ideas. especially for NPCs.  Anyhoo, here we go:


Okay, that took about 5 minutes (the little graphics not included).  It’d take a little longer if I wanted to give them some magic items. But since the 5e Basic download contains no items, I’m skipping it.  Low magic rules, anyway. So now we’ll give the new version a whirl.

Putting those together took longer than I expected, but I can't report a fair time for it because I got distracted by Futurama.

As I experienced with 3e, picking spells was the opposite of fun.  Give me lists sorted by class and level any day.  Heck, I don’t even know if I picked the right spells to go with Evocation School abilities, because I decided to pick spells by name rather than scrolling up and down the alphabetical list.  If I were to run this version, I’d have to redo the spell lists.

Overall, the 5e version of Ororo the She-Devil looks fun and manageable, certainly less of a headache to manage than similar fighty NPCs made under previous WotC editions I’ve used.  But the new wizard seems like a pain in the ass to run as an NPC.  In BX I can get away with spells known = spells memorized, this strikes me as a bigger fuss to deal with.  Maybe players will dig it, but if I ran 5e I’d probably be cludging together wizards rather than building them according to the PC rules.  Which I kinda do in BX, by the way.  NPC wizards always have something weird and messed up about them, because, hey, they’re wizards.  But I generally prefer bolting weird new stuff onto a simple set of rules rather than wrestling a more sophisticated system to the ground.

So 5e looks better than anything I've messed around with from the Wizard o' the Coast, but I don't see anything yet to dislodge my irrational attraction to the older versions.