they came from Chainmail 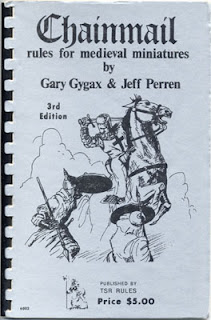 Today I got to wondering about what monsters were in D&D from the beginning. So I got out my copy of Chainmail to put together an alphabetical list.
basilisk
chimera
cockatrice
dragon - red, blue, white, black, green and... purple!
dwarf
elemental - earth, air/djinn, fire/efreet, water
elf
fairie - mechanically identical to elves, but less likely to serve with the forces of Law
ghoul
giant
giant spider & insect
giant wolf/dire wolf
gnome
goblin
griffon
halfling - undoubtedly hobbits in an earlier edition
hippogriff
kobold
ogre
orc
pixie
roc
sprite
treant
troll
werebear
werewolf
wight
wyvern
zombie
No giant snakes! Anyway, it's pretty clear that most of these monsters are ubiquitous across editions. Fairies became Gray Elf (Faeries) in the original Monster Manual and just Grey Elves after that. Purple Dragons became Purple Worms at the same time. Efreet and Djinn got there own statblocks and piles o' special abilities. Other than those changes, the above listed creatures remain stock monsters throughout the history of the game.

Retroclone publishers might want to check the above monster list against their own monster section. And referees might find it useful to look at this list ask themselves if they make regular use of these critters. And if not, why not? I'm not arguing for any prescriptive adoption of a standardized monster list. I simply think it might be an interesting thought experiment to compare one's own monster usage against these hoary standards. For example, I see that the only humanoid goons listed are orc, goblin and kobold. While I've gotten lots of mileage out of gnolls, bugbears and hobgoblins, it might be cool to cut back on their usage for a while and focus on fewer types of humanoids. Just a thought.

Three unrelated but interesting tidbits from the Fantasy Supplement section: