Sniper! was a little wargame of man-to-man fighting on the Eastern front in WWII, publihsed by SPI in 1973 and written by wargames guru Jim Dunnigan. I've never played Sniper! outside of the Winter War variant, so I can't really tell you how the original game plays, other than it uses hidden movement and written orders, both of which are crucial factors in the local con version.

In the Blind Sniper tournament there are no teams. Every player is trying to win individually via one of two methods: Visit all five Objective Hexes and exit the board OR be the last one standing when the smoke settles. The game starts immediately after the Saturday afternoon live auction, usually 4pm or so, and the game continues until it is done. I'm told this year the last turn wrapped up about 4am. I didn't stick around since I was dead well before that and wanted to get some sleep before my Tekumel game the next morning.

The game takes so dang long because one moderator (local gaming legend Bruce Gletty) has to process all the written orders and write individual responses. At the start of the game there are usually 20 people on the board, so it takes the dude a while despite keeping the written orders as dirt simple as possible. Each turn is two seconds, so something as simple as running up or down a staircase takes a whole turn. Switching weapons also takes a whole turn. When just running around the hexmap you get 10 movement points. The map includes a little compass with hex facings labeled A through F, so a move could be written as simply as "6B 4C". Or maybe your last turn results showed "Man in hex 2210" so you simply write down "blast him!"

Which brings us around to the inherent tension of the game. Everyone starts with a gun of some sort. Some years everyone gets a pistol. This year we all got a shotgun with a single round it in. Sprinkled around the map are more guns you can pick up: rifles, machine pistols, flamethrowers, etc. And some satchel charges with variable fuses you can set and leave for others to find. So here you are running around the map trying to tag the objective hexes when you stumble across some shnook who's only a couple of hexes away. You see him and he sees you. What do you do? If you both run you get to continue the game. If you run and he shoots you're probably at least wounded (fewer movement points, worse to-hits), possibly crippled and maybe dead. If he runs and you shoot maybe you'll get him, maybe your turn is wasted due to bad dice. If you both shoot you could end up spending the rest of the game looking eye to eye and bleeding out on the ground.

The critical psychology here is that none of the players want to exit the game without having gotten off some shots at someone. This leads to a lot of sub-optimal behavior. This year I made a pact with myself to run at every opportunity and I ended up dead with that one starting shotgun shell still in my weapon on turn 11. Frustrating. I had been doing well avoiding danger, except for one run-in with my brother-in-law Jim. We both ended up in the same hex at the end of a turn so Bruce called us aside and asked whether we wanted to shoot or run. I declared "run" and went back to my seat. Jim apparently opted to run as well, because he didn't kill me until several turns later, when I ended my movement on a hex containing a satchel charge he had armed. It exploded before my next movement opportunity.

Anyway, here's part of the map, in all its pink and white glory: 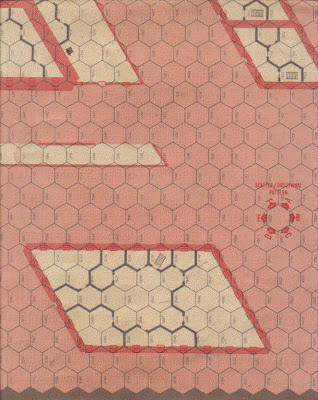 Given that the scale is obviously 2 or 3 meters per hex, I have long wondered what the hell is up with that one hex wide building near the center of that pic. What use is a building that narrow and long, one story tall, with extra wide doors? One of the trickiest things about the Winter War variant of Sniper! is that everyone picks there starting hex. You can choose any outdoor hex that does not contain an exterior ladder. For many years I chose one of the three places on the map where a building corner touched the map-edge, creating a corner with only a single open hexside. I hated the idea of starting with my back to someone. But then somebody else had that same idea and we both started in the same hex and blasted each other on turn 1. I think that was one of my nephew's doing. This year I looked at the shotgun rules and saw that they were ineffective past 8 hexes, so I opted to start at the end of a nice broad street. Three others started in view but not in range, so I just ran like hell to the nearest building interior.

I think the best I've ever done in this game is 4th place, but it continues to be a fun way to spend one Saturday a year.