So you want to run your own Vaults of Vyzor-type game, eh?

Over on the Google Plus, cool guy Karl Stjernberg wrote:

Hey Jeff! I've been thoroughly enjoying reading each and every "Vaults of Vyzor"-post on your blog (and a lot of your other stuff too), and it has inspired me to maybe try running a game like that myself, but for people at work.

I'd like to know more about the game in genera, such as:

What are your methods for running such a game? What you do for prep, how do you generally you run things, are there things that can be worth knowing for running a vaults-type game, any do's and don'ts, what are your five most valuable resources?

I'm pretty sure I'm not the only one who'd like to know more about this and maybe it could even be something you could write more about on your blog? Kind of like a "So you want to run your own Vaults of Vyzor-type game, eh?"-kind of post?

Anyway, I hope you keep running this game until the end of time, because I am enjoying reading the play reports a lot

Thanks for the kind words, Karl!  I'll attempt to answer your queries here.  You (and everyone else) should feel free to ask follow-up questions in the comments.  Anyway, let's begin.

The longer I do this sort of thing the more I'm convinced that good dungeonmastering is about making connections.  In this era of near infinite DMing resources, making up stuff whole-cloth is actually a secondary activity, albeit a good and rewarding one.  Basically, what I mean is that I don't create a campaign like Vyzor so much as assemble it. 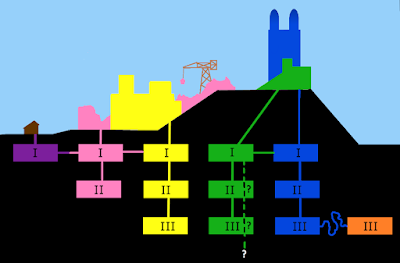 So there's 13 known levels of Vyzor.  You know how many of them I wrote myself, starting with blank graph paper and my notebook?  Just one.  The rest are cobbled together, scavenged from old game products, stitched together with a handful of extra corridors and stairs, and edited for a bit of continuity.  One dungeon had a high level elf with super powers and a bad attitude.  Bam.  There's my master villain.

When putting these disparate pieces together, I just try to figure out some useful questions to ask about the different pieces.  Are the orcs in section A in the same tribe as section B? Which factions are allies, which are opposed, who runs the whole dungeon (if anyone), etc.


Prep for each session consists primarily of reviewing who it is I am inviting to the game and maybe looking over my big mess of dungeon notes and maybe reading the prior session report. For me a lot of the magic of D&D happens in the moment of play; the art of the game isn't found (at least for me personally) in writing things before play.  That's an important part of getting ready for the game, but in many ways it is cooking the meal when I want to eat.  Or it's like improvisational comedy or freeform jazz: you assemble your materials, you practice your repertoire of techniques, but when the time comes it's more fun the less of a safety that I have  under me.   So for example during the course of play, I like to look at my map and glance at the key.  I try not to read it if I don't have to and I try to avoid looking up anything in the rulebook.


My primary tools are the map and a screen with a few charts on it (of which saving throws and wandering monsters are the ones I look up most often).  I also have my composition notebook and some pens, penciles, marker handy.  For dice, I’ve really pared down in online play.  When playing by hangout I’m usually sitting in my easy chair with a small side table.  I don’t have a room for the DM’s usual array of dices.  I use a single d20 and a single d6.


As far as do's and don'ts go I think I would start with this: DON’T feel you have to build a whole bunch of backstory for your dungeon initially.  If you look back at my original post pitching the dungeon it was only slightly more than “here's a dungeon let us play.” The rest of the backstory can develop organically in drips and drabs thereafter. Sure I had some initial unfocused thoughts on the relationship of the Sorcerer of the Blue Mask to the Elf King lurking in the levels below, but I didn't need to flesh those ideas out until 15 sessions in.


But what info I did supply mattered immediately. DO give the players something to think about at the very beginning of play. That's why I had 4 entrances to four distinct areas of the dungeon. This is something that goes back to Uncle Gary's Keep on the Borderlands: if you're going to have a dungeon that's going to be the center point of your campaign or at least several sessions with multiple expeditions, then you want either multiple ways into the dungeon like the various Caves of Chaos or you want a place early in the dungeon that branches out in many different directions like say a grand hall with a bunch of different doors or a vast cavern full of branching passages where it's not going to be possible in one expedition to cover it all. I did the same thing with my previous online campaign where we started with three caves next to the sea and later four ways into the castle proper and then one expedition found a hidden fifth way in.

These options ensure some player agency every session by giving something for the players to chew on right away. It also meant that people playing later in the course of the campaign--maybe someone who hasn't played at all for the first 10 or 20 sections of the campaign--might still be able to explore something fresh and new.

I feel like this post is getting rambly and unfocused, so I'll stop for the moment. Karl, does this help answer your questions? If not, please ask follow-ups! Everyone else is invited to do so as well.