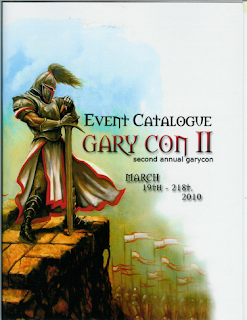 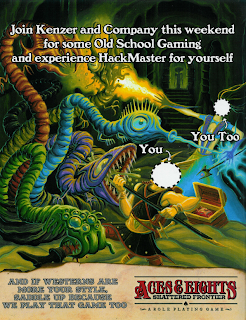 I really dig this ad from the insider front cover of the program booklet, despite the terrible wrong it does to the work of Erol Otus. 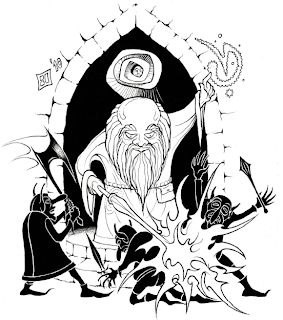 More Erol Otus art from inside the program booklet. 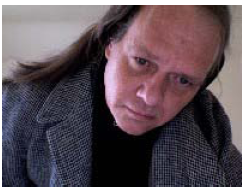 Rob Kuntz wins the award for Creepiest V.I.P. Photo in the program. 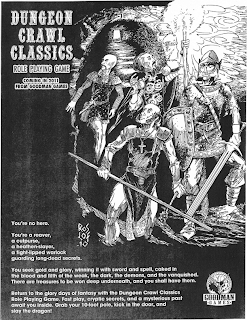 DCC-rpg flier from the freebie table. 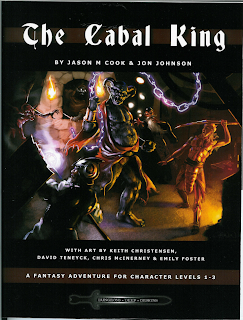 The dude selling official con T-shirt's was just giving away this nicely produced 88 page module!  As an early bird registrant I also scored a swag bag containing Knights of the Dinner Table #147, the Kingdoms of Kalamar Campaign Setting Sourcebook, Kingdoms of Kalamar Atlas, and Jim Raggi's awesome The Random Esoteric Creature Generator for Classic Fantasy Role Playing Games And Their Modern Simulcra!  (Regarding Raggi's book:  Like dice?  Also monsters?  Then buy it!)  That stuff retails for over 80 bucks and the con only cost $20 to get into. 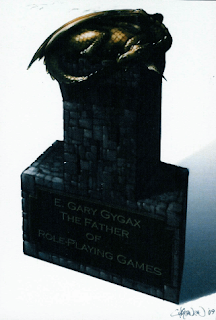 The back cover of the module above depicts a mock-up of the proposed Gygax Memorial.  The pic is a little too dark, but that's a gold dragon sleeping on top of a tower fortress. 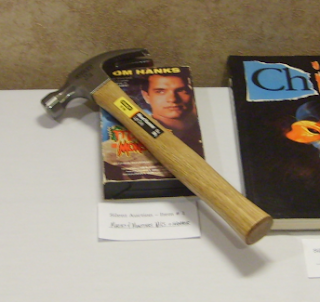 Lot item from the silent auction: one (1) VHS copy of the Tom Hanks classic Mazes & Monsters and one (1) claw hammer. 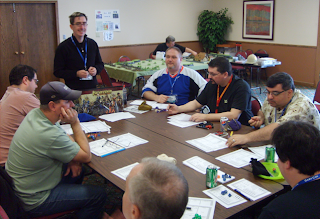 Nevermind the Pathfinder screen: I got in on one of the playtest/demo sessions for the forthcoming Dungeon Crawl Classics RPG.  Joe Goodman was a pretty good GM.  The guy reaching for the paper is James Mishler.  It was neat to play a game with James again. 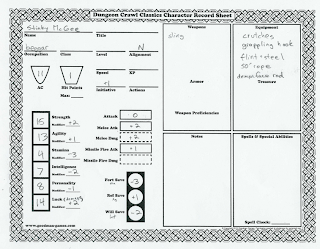 For this particular playtest session everybody got two or three zero level characters with randomly determined races and professions.  My locksmith died fairly early on, but ol' Stinky McGee here not only survived the session, he never attacked a foe even once.  I did a fair amount of encouraging others to take all the hard chances.  At the end my character ended up with half a magic artifact (the 'demonface rod') and instructions from some goat-headed demon on the evil deeds necessary to secure the other half.  The best anybody else got were a handful of gems or some weapons or armor.  Therefore I am declaring myself the winner.

Mishler got to play in an earlier DCC-rpg session with first level characters.  He reported what sounds to me like a totally awesome but potentially cumbersome mechanic for spellcasting.  Every spell comes with a success chart something like this:

That's not an exact duplication of the system, but it gives you the basic idea.  Every time you cast a spell you roll d20 plus Int mod plus Caster level and look at the chart.  You only forget a spell if you fail. 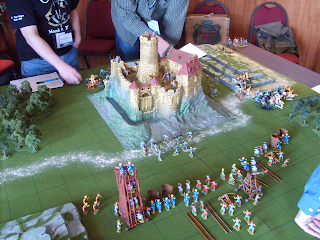 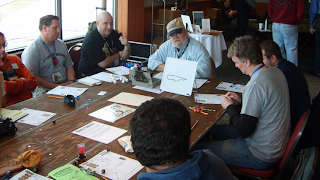 The other game I got to play was an OD&D session run by Tim Kask.  Mr. Kask was the first full-time employee of TSR Hobbies.  The program said this run was for "Expert dungeon delvers" only, so I felt a little dumb sitting down at this table.  Turns out I was the only guy their besides Mr. Kask with any specific OD&D experience, so I didn't really have that much to worry about.  I ended up mapping and assigning marching orders, helping the elf next to me pick out and throw spells, while the dwarf across the table (who I put in front) determined many of our actions out of combat.

See the head of black hair bottom center?  That dude and his buddy flew in from Italy specifically to attend this convention.  They had taught themselves English in order to learn to play D&D.  I handed him the last of the three copies of Encounter Critical I had brought along to give away.  I wish I had brought my own copy to get Mr. Kask's autograph (see the inside front cover for why).

In the middle of Kask's run I look behind me for some reason and notice that if I scoot my chair back more than an inch or two I will totally bump into Frank Mentzer, who is running a game immediately behind me.  Meanwhile Jeff Easley is about ten feet away the whole time, just relaxing next to some original art that's graced the cover of many old TSR products.  Additional incidental name-dropping:  I brought along my brother-in-law-in-law's copy of Metamorphosis Alpha to get Jim Ward's autograph in it, which he was very pleased to do.  As he's signing it Tom Wham walks by and says something like "the value of that collectible just went down 10%".  They both laughed heartily. 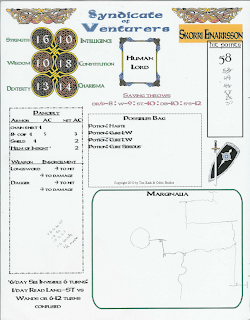 My character from Tim Kask's game.  When in doubt pick the viking.