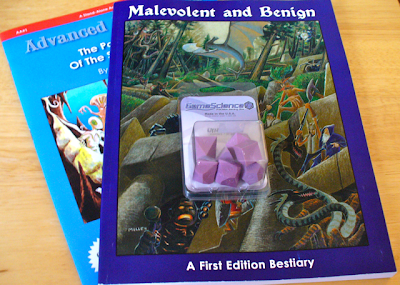 My recent visit to Games Plus affords me an opportunity to share with you the method I've developed for inking GameScience dice. Last year I switched exclusively to GameScience as my dice of choice, as explained here. One of the big differences between GameScience and its competition is that the dice come with no pigment in the numbers, so they have to be "inked".
The traditional technique is to rub a crayon repeatedly across the number and then wipe away the considerable excess with a tissue or paper towel. That's why old boxed sets use to come with crayons. There's nothing particularly wrong with doing it the old way, but it could take a while. Also, the GameScience d10's have this circular groove that can catch some of the crayon and be a pain to get out. Like this: 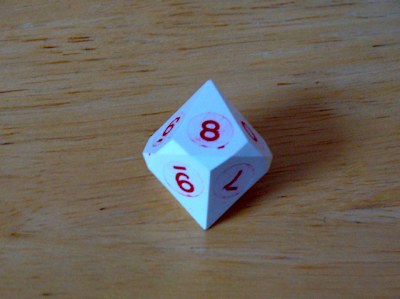 So I developed an alternative to the crayon. I start with washing the dice in some water with just a touch of dish soap. 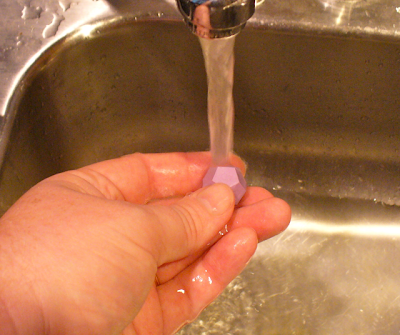 I wash the dice because they are manufactured using an injection molding technique. Injection molding often requires the spray of a release agent on the inside of the mold before the plastic (or whatever) is squirted in. This helps the finished product separate cleanly from the mold, the way a little butter in a pan helps keep the food you're frying from sticking. Washing the dice gets that agent off of them. At least that is true assuming a release agent is used. I don't really have any information on that point, but serious miniature painters recommend washing your figures for the same reasons. 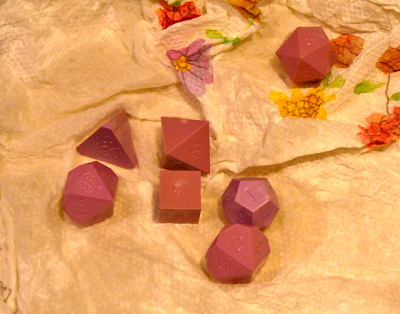 I pat the dice dry with a paper towel then let them air dry for a few minutes. 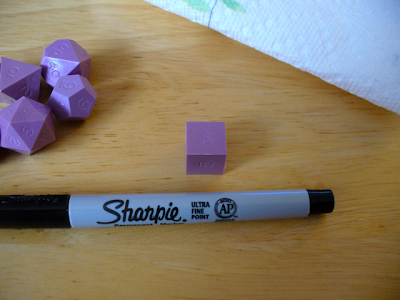 Instead of a crayon, I use a Sharpie Ultra Fine Point permanent marker. I've seen them for sale at office supply stores, department stores and even the home office section of my local drugstore. You can get a pack of several colors for a few bucks. I usually use black but sometimes I select a color that contrasts the dice. 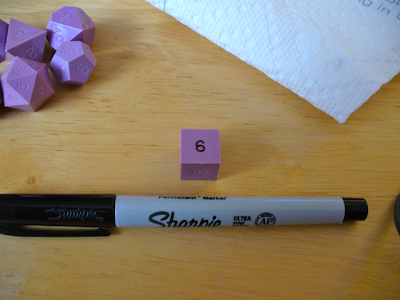 The neat thing is that the Ultra Fine Point fits right into the groove of the numbers. Two or three passes through the groove is sufficient to coat the entire recessed surface of the number as well as the walls of the groove. Just trace the number as if you were writing it, reverse direction and write it backward, then write it forward again.
Tip #1 - If after three passes you can still see the color of the dice in the number, you're probably pressing too hard. Ease up a bit and try again. If that doesn't work, you might want to switch to another color, probably black.
Tip #2 - If you color outside the lines, do not panic! Wipe away as much of the stray ink as you can with a paper towel and possibly a little saliva, but don't fret if a smear is left behind. Any ink not in a groove will be gone after only a few sessions of use. 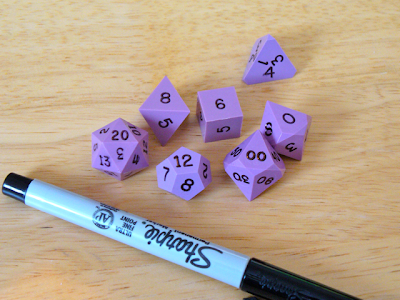 Tip #3 - Do the d20 and d00 last. The smaller numbers require slightly finer manipulation and the practice of doing the bigger numbers first will help you get your technique down. I often do the other dice then take a short break because my left hand (which I hold the die with as I ink) is a little cramped up after the first five dice.