This one's for Gary 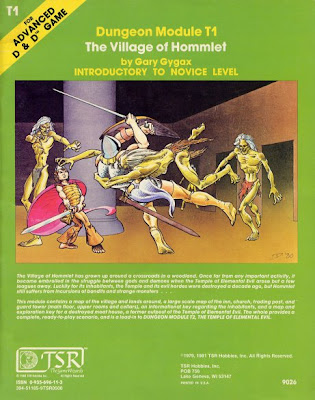 Last night my group got out the 1st edition books and rolled up some level one losers. We used Method IV, where each player rolls 3d6 in order twelve times and picks the set they like. It's kinda like going to Baskin Robbins but they're out of vanilla, chocolate, and that one weird flavor you actually like. Sure, you get a choice, but you're picking the best of a mediocre lot.

Pat ended up with a set of reasonably good stats excepting that the Charisma was so low he could only play an assassin. So he drove his Charisma even lower by opting to be a half-orc. Doug came up with a character with high Int and Dex. We tried to trick him into playing an illusionist, but he opted for a straight up magic-user. When he diced for the initial spells in his book he came up with light for his "offensive" spell. He didn't cast it or any spells all night, as I recall. He threw some daggers and even hit a couple of times. But in the grand tradition of crappy 1st level m-u's he spent most of the night leeching xp's off the rest of the party. (Special note to Doug: had we played OD&D as I wanted, you would have had access to all 1st level spells. So there.) Stuart ended up with a human cleric, which he opted to play as a harsh Lawful Neutral servant of a harsh, Old Testament-style Lawful Neutral god. I'm thinking Marduk is a pretty good fit, but we didn't spend any time worrying about the specific deity. Stuart brought three live goats along, in case he needed to sacrifice something while in the dungeon. (Fortunately "virgin" is not listed among the standard equipment in the PHB.) Anytime the goats misbehaved he lectured them sternly.

We started out right at the Moathouse, the dungeon tucked in the back of module T1. As Doug put it "If you play the module as written the players spend the first couple sessions wandering the village and getting pissed at the DM." So we skipped that part and went back to town as needed. Doug knew much of the module, so he made sure the party recruited Elmo, the "stupid mercenary" who is actually a 4th level ranger. When the party wanted to buy a tent, I told them it would cost 5gp. I totally made up that figure and Doug complained it was much too high. I replied that the module clearly indicates the traders in the town like to soak adventurers. Stuart off-handedly offered to pay Pat 2gp to assassinate the tent salesman. Pat can't turn down an offer like that, so I cracked open the assassination chart.

None of the players, not even Doug, knew that the two traders were secret agents of the Temple of Elemental Evil. Out of kindness I decided that the lower level member of the duo would be Pat's target, giving him a 10% chance of pulling off the job. He rolled an 02, scoring more xp and loot than the party would get out of their first two encounters in the Moathouse. Between the cutthroat gig and the actual adventuring, Pat's dude is now 3rd level while the other PC's still languish at 1st. And he's packing a dagger of venom. He gave Stuart the chainmail+2 his victim was wearing.

The session ended in the upper level of the Moathouse. The bandits in the corner tower were soundly defeated, thanks in large part to Elmo the Secret Ranger. Two of their number escaped. Between those guys getting away and the partner of the assassinated trader the PCs are starting to build a decent enemies list.

We're going to do this again in two weeks. As I mentioned at the session I've got years worth of old adventures, between TSR stuff, Judges Guild, Dragon inserts, and the odd Mayfair module. Doug really wants to tackle the Temple of Elemental Evil. I can't find my copy for some reason, so I may have to get a new one.

It was generally agreed that we could use some more players for this campaign. If anyone within driving distance wants to get in on this action, leave a comment or shoot me an email. As I always I'm at jrients {at} gmail {dot} com.