Every snippet of info I hear about the new edition of D&D makes me cringe just a bit. Don't get me wrong. I'm pretty confident that the folks at Wizards, especially Mike Mearls, can produce one heck of a sweet game. But I'm losing faith that they are producing a game that I want to play. The more I look at the chinese water torture that is the 4e PR machine the more I feel like ditching mainstream D&D and going this way: 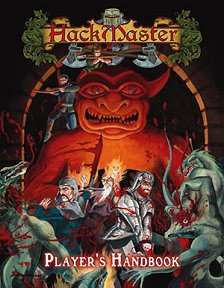 Yeah, HackMaster. It's Retro Stupid. It's got all the Gygaxian Building Blocks (as brilliantly identified by Settembrini) preserved in their original form. It's overly complicated and possibly broken in some places, just like AD&D when I was a kid. See, I'm not sure I want a slick, fine-tuned, laser-precise D&D. If I want something that is slick and fine-tuned, I already have Risus. What I really want out of D&D is arguments over rules, PCs behaving badly, grotesquely absurd violence, filthy nonsensical dungeons, and lots and lots of really stupid dice charts. I want the players to try to finesse some retarded rule to weasel out of a tight spot. I even want the Monty Python jokes. Is Wizards going to give me these things? I don't know. But I'm getting the vibe that most of what I like about the game is on the chopping block as possible casualties in the name of progress.

Remember a while back when Mike Mearls "fixed" the Rust Monster? Keep in mind that of all the 3.x designers out there, Mearls is clearly my favorite. So understand that I'm not taking a swipe at the guy personally when I say that I thought Mike was fixing something that wasn't broken. The Rust Monster is supposed to ruin the fun, in just the same way that poison or level draining or failing an item save is supposed to kill your buzz.

I remember the first time a Rust Monster happened to me. I was running a fighter named Arius Claudius who ran around in uber-expensive Unearthed Arcana style Full Plate armor. Not only did I suddenly have no armor class, but thousands of GPs I had invested had just gone down the tube. I ended up beating the Rust Monster to death with the wooden haft of my trident, the three pointy bits have been rusted away as well. For the rest of his career (until that Deck of Many Things incident) ol' Arius carried a spare set of bronze platemail in a bag of holding. And a club. That's an adventure, my friends. Not "Oh noes! I almost lost my armor!" Meanwhile, HackMaster offers a world where the default assumption is that the GM is a dick and his campaign setting is actively hostile towards the players. The players are supposed to use their wits to get by and possibly prosper. Every XP and GP has to be pried from the GM's cold, dead hand. I don't usually run that kind of game, but I like that attitude as the baseline.

Maybe something will come along that will make me actively look forward to 4e. Until then, everything else is pushing me towards HackMaster as the big, crunchy system that best fits my needs. Right now, about the only things I like are that Mike Mearls is on the project and that one of the classes in named "Warlord". But I'm a sucker for anything with "War" in the title: Warforged, Warlock, Warrior, Gwar, etc. That's not a whole lot to hang one's hopes on, especially in light of the fact that every other bit of 4e material I've come across has either left me apathetic or annoyed.

Maybe my problem is that I'm not in the target demographic for 4e. At this point I actually kinda hope that's the case. The alternative is that Wizards is so missing the mark that they are driving a D&D fan of 25+ years to a competitor. A competitor, I might remind you, with a core monster "book" that runs eight volumes at $20 apiece. For them to screw up so badly as to make me look at a significantly more expensive and less popular option speaks volumes about their PR efforts.