The dorkiest thing I've ever done. 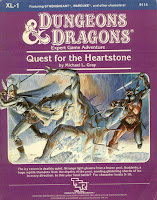 Big thanks to S. John Ross for reminding me of this little episode from my youth. If you like rpgs that are awesome you owe it yourself to check out S. John's Cumberland Games & Divisions, where much of his best work is absolutely free.

Module XL-1 Quest for the Heartstone came out in 1984. I turned 11 years old in 1984 and had already been gaming for maybe three years. I was a total D&D junkie. And not just the D&D roleplaying game. I was into the whole experience. I watched the cartoon, owned the action figures, and was generally into the whole D&D Boom experience. Hell, I had the official D&D woodburning kit, which consisted of an electric woodburner (it burned flesh too, as I quickly discovered by accident) and some cheap planks of wood with orcs and such printed on them.

When I saw Quest for the Heartstone at the B. Dalton Bookseller in Bloomington, Illinois, I knew I had to own a copy. The cover featured two characters, the paladin Strider Strongheart and the badass Warduke, that had appeared in both the official toyline and the cartoon series. And the text on the cover promised official statistics for these two guys and many other action figures! Hot damn! So I bought the module. On the drive home I eagerly tore away the shrinkwrap and prepared to dive into the Awesomest Adventure Ever. I quickly found the section giving page after page of statistics for various characters from the figure line. That's when I found the stats for Zarak and nearly fell out of my seat. 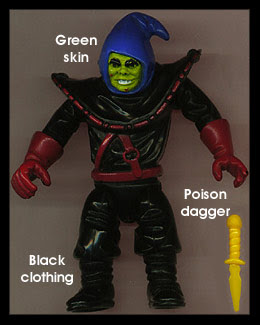 Zarak is my favorite guy from the AD&D figure line. He's the only action figure I still have from the toyline and nowadays I display him in my gameroom almost like an icon of a patron saint. The packaging he came in said "Evil Half-Orc Assassin" under his name. He's not a badass warrior like Warduke, but a nasty little fucker with a poison dagger and an almost Quasimodo-like build. The blue hood has always struck me as an odd fashion choice, though. Some folks might remember that over at RPGnet and still in a few other places I've used a close-up on Zarak's face as my avatar. Later I had a little pixellated cartoony version of the dude.

So what was the big deal with the Heartstone stats for my beloved Zarak? According to the book, he wasn't an Evil Half-Orc Assassin. He was statted up as a Chaotic [Human] Thief. A few more moments of bewildered flipping around revealed the problem. The toyline had been billed as Advanced Dungeons & Dragons figure. Hence the assassins and paladins and barbarians. But module XL-1 was written for Menzter Basic/Expert/etc.

Most of the other characters were fine as written. You can't really screw up the stock wizard, the cleric babe, the silly elf, or the grumpy dwarf. Strider Strongheart , who I already knew as a paladin, was just a fighter with a sword that allowed him to cast cure light wounds once a day. That was less than ideal, but I never had much interest in paladins anyway. But I just couldn't accept Zarak being robbed of his alignment, his race, and his class. And this is when I committed what I personally consider the single dorkiest act of my entire life.

I asked my folks to turn the car around. I went back to the store and I returned the module.