I knew I had these images somewhere, but today I finally dug them up to share.

Blackmoor has its own world, which got a hardbound late in the 3.x era.  It also appears on the Greyhawk map.  And if you go back in time in Mystara, you'll find Blackmoor there as well.  It's also to the northeast of the Wilderlands of High Fantasy.  Dig it: 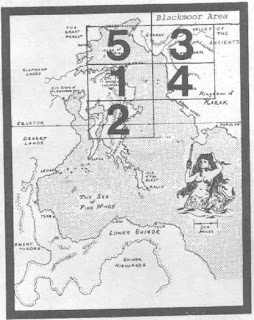 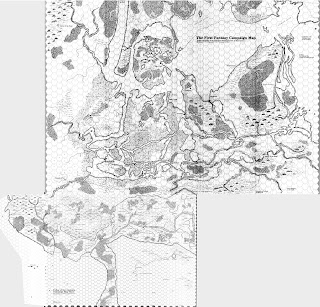 Note that Rob Conley's Map 19 just north of the Wilderlands (found in Fight On! #3) would be due west of Blackmoor.  I wonder if they line up?  I should dig out my copy of FO! 3 and check.

This placement of Blackmoor ruins my earlier proposal but I think that you *might* be able to work it out so that Greyhawk and the Wilderlands stand side-by-side with Blackmoor in the center-north.  Either way, the two campaign worlds are connected by this strange northern realm AND both lurk in Mystara pre-history.  How cool is that?

Of course, they're not all really the exact same Blackmoor.  But a boy can dream.

I vaguely remember Arneson once noting that the Outdoor Survival map was connected to his First Fantasy Map as well, but so far I haven't tracked down the reference.