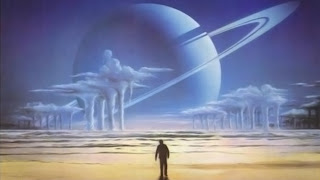 Above is the new background image for my work desktop.  My boss has pictures of her grandkids, I go more for images of sci-fi majesty.  This is either promo art or the concept piece for the final scene of the 1985 non-classic The Quiet Earth.

I've only seen this flick a couple of times over the years.  My distinct impression is that most of the movie is only okay, not particularly awesome, but the final scene is 100% kick-you-in-the-brain great.  I'm going to spoil it here, since we're talking about an old movie nobody watches: the hero dies, then mysteriously wakes up on an unknown beach, and this Saturn-looking world rises over the weirdly-clouded horizon.  No explanation, roll the damn credits.

Somehow in just a few seconds of poorly-animated matte painting cheesiness, this scene captures nearly all the enigmatic majesty and power that 2001: A Space Odyssey tries to reach in its approximately 400+ minute final act.

I don't use visual aids much when gaming around the tabletop.  Passing around a picture to gawk at seems to really break the enchantment for me.  But posting a link in the chat window of a Google+ Hangouts game seems to work a lot better.  In Jeremy's recent Outland session he shared a picture of a monster to great effect.

Just to be clear, I'm not advocating that we flash pictures on the screen for every little thing in a G+ game.  The point of using hangouts isn't to act as a subsitute for our imaginations.  But I like the idea of once in a while being able to wow the players with a really kickass picture, like an alien sunrise or a particularly messed-up demon or something.  In fact, that might be the missing puzzle piece for a good sci-fi exploration game.