The Two Types of Fantasy Campaign

Recently I have reached the conclusion that no single fantasy rpg, setting, or campaign will ever fully satisfy me. This insight is not meant to be a reflection on my inability to stop buying game stuff. I'm talking strictly about the activity of gaming, not the steady stream of crap I collect. My key self-insight is that I enjoy two distinct types of fantasy gaming which actually have relatively little to do with one another. I'm starting to suspect that I've abandoned some projects of mine and allowed others to flounder because I tried to mix these two different varieties of rpg experience.

Let's call the first one eclectic fantasy. 'Gonzo', 'over-the-top', and 'wahoo' might also fit as labels. Detractors might refer to this as the kitchen sink approach to 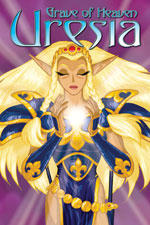 fantasy. Adding in stuff just because you think it's cool is the order of the day. Mixing sci-fi and trad fantasy is perfectly acceptable in eclectic fantasy. Dave Hargrave's Arduin was a much-celebrated early entrant in this field, though it must be noted that Arneson's Blackmoor and Gygax's Greyhawk both had their share of robots and rayguns. Anybody who DM'ed AD&D during the first edition era probably remembers the rules in the Dungeon Master's Guide for crosspollinating Boot Hill and Gamma World with Advanced Dungeons & Dragons. Lords of Creation, World of Synnibarr, and Rifts tackle this style of play head-on. The 3.x versions of D&D can easily be pushed down this road, as the existence of lines like Iron Kingdoms and Eberron attests. It's clear to me that Exalted also fits into the eclectic mode, especially with the publication of the robot book. Two current favorites of mine in this category are Encounter Critical (which will get its own gameblog entry soon) and S. John Ross's superb Uresia setting.

The main thing that draws me to eclectic fantasy is the endless variety. The next adventure could take place on a spaceship, or another universe, or on the moon. The next foe could be cyberninjas or balrogs or time travelling Nazis. The PC party could be a pirate, a wizard, and a yeti. The treasure after the fight could be a supercomputer, a shiny sword, or the deed to the third layer of Hell. Eclectic fantasy adventures have an 'anything goes' spirit that really appeals to me. Perhaps it has something to do with the superhero comics I read as a kid. Throw in too many episodes of Doctor Who and that's a formula for an overstimulated imagination. To date almost all of my efforts in fantasy roleplaying have been eclectic to one degree or another. About the only clear exception was my one go at running Pendragon.

Pendragon is one of the shining examples of that other type of fantasy that seems incompatible with eclectic fantasy. I'll call this second variety deep fantasy, though some would call it 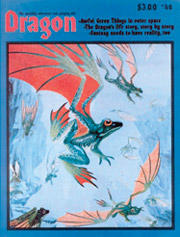 generic fantasy or vanilla fantasy. The authors of QAGS dismiss deep fantasy as "you know, elves and shit", but I think it can be much more than that. By adopting a minimalist, traditionalist approach to the broad issues of setting the GM is free to examine other issues. I'm specifically thinking about things like setting and plot detail and the evocation of a consistent atmosphere. In addition to Pendragon, you can probably count MERP and Decipher's Lord of the Rings in this category. Nearly any version of D&D could be made to work as deep fantasy, even if that's not the way I normally see them played. For some deeper approaches to AD&D look to historico-fantastic material, such as the campaign setting splats for AD&D 2nd edition, or a mythological take like the excellent article "Believe it or not, Fantasy has reality" (Dragon #40, August 1980). I'd rank "Believe it or not, Fantasy has reality" as probably the second best article ever published in Dragon, right behind Bruce Seligman's "Gandalf Was Only A Fifth Level Magic-User".
Although I normally picture dour dwarves and red dragons when thinking about deep fantasy, other options exist. The non-western/non-Tolkien setting games like Tasilanta, Jorune, and especially Tekumel all look like 'alternative deep fantasy' to me. Sure, these settings are chock full of weird stuff not normally seen in the Great Kingdom or the Dalelands, but these games still provide a normative baseline from which rich setting information may emerge. By stressing consistency and continuity, the GM is able to do more with far less. You don't need many magic swords in a world where each magic sword has its own powers and history. You don't need many different realms to adventure in if you have one kingdom sufficiently detailed to keep the players interested. And you don't need 500 different monster types if you say something interesting with each monster that appears. And encounters with NPCs become much cooler when the DM has a handful of miscellaneous details on each one.
But the king of deep fantasy is probably Harn, the hardcore research-crazy medieval setting. One of the things I really, really like about Harn is that the prodigious

HarnWorld setting information is package completely separately from the HarnMaster engine. This makes it easy to use your favorite generic or fantasy system with Harn. I know of at least one campaign run using the classic D&D Rules Cyclopedia. My first look at Harn led me to conclude that MERP or RoleMaster would work just as well. And I have no doubt that GURPS and HERO System treatments exist on the web just a google away. By all accounts Harn is one of the most complete and soberly researched fantasy worlds on the market. If Tolkien had written his works as encyclopdias instead of novels then The Lord of the Rings probably would have ended up looking a lot like Harn in terms of presentation and completeness.
My point of all of this is for years I have been trying to run Harn and Uresia at the same time. And as far as setting a consistent tone for the campaign it's about as useful as mixing bleach and ammonia in your kitchen sink. I like both kinds of campaign. The fireworks and freakouts of eclectic fantasy are no more or less desirable to me than the subtle richness and quiet strengths of deep fantasy. But putting them both together only drives me mad as I try to top the zaniness of the previous session while simultaneously trying to push an intricate plot. And now that I think about it, my reticence to tackle sci-fi gaming can be partially attributed to an unconscious desire to avoid choosing between the syles encapsulated by Star Wars and Star Frontiers. But that's another essay for another day.