I've talked about the classic TSR boardgame Divine Right before, focusing on its eminent suitability as setting material for a D&D campaign.  A while back Evan over at Swords of Minaria posted a nice scan of the board from the game.  Below is a shrunkified version of the map in question.  You can go on over to Evan's blog and scroll down to snag your own copy of the larger version. 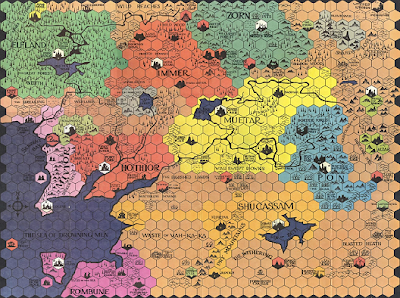 Seriously, folks.  You got to check out this map in its full glory.  It's one of the best examples of imaginary cartography in the hobby, right up there with Darlene's map of the Flanaess or Pete Fenlon's maps of Middle Earth.  Although you could squeeze a lot of mojo out of the game itself and designer Glen Rahman's copious source material (published over the course of a bunch of Dragon issues in the late seventies and early eighties), the map is so dense I think any enterprising DM could run a helluva campaign armed with nothing else.  This map is positively loaded with potential adventure sites.  What self-respecting adventurer would turn his nose up at a visit to the Invisible School of Thaumaturgy or the city of Zefnar-on-the-Sea or the Creeping Forest?  That's just three of dozens of labeled areas on the map.
But the adventure doesn't end at the larger features and individually labeled hexes.  Minaria is full of additional possibilities that pop out if you just look closely at the geography and political boundaries.  Here's a few such items I find intriguing.

Just west of where the elven waters of the Melting Star merge with the more mundane Sullen river is a clear hex in the no-man's-land.   Who might live in Sullen Bend, the tiny realm between the fairy forest and the Wetlands that keep the elves of Neuth and inhabitants of the Trollwood apart?

How easy is it to cross the River Rapid and get to that island just south of the 'LD' in 'Wild Reaches'?  What's so important about that tiny spit of land north of the river (marked red) that Immer holds against the barbarians of the north?  The latter is actually an artifact caused by the decision to color all land hexes with a single shade to denote political boundaries, but I never turn down an opportunity to build material from such accidents. 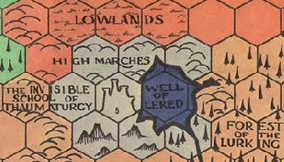 The southernmost red hex looks like another place that's hard for Immer to hold.  What challenges does the local lord face in that hex?  And what lurks in the Forest of Lurking such that the wizards of the Invisible School are unable to control the entire shore of the Well of Lered?

Here's a small lake and tiny forest between the Wasted Dead and the Mines of Rosengg.  Neither lake nore forest has a name, but that doesn't mean it lacks a story.  Incidentally, I love how the forests on this map are done.  They haphazardly spill across the hexgrid in places.  And most of the forest are tall, skinny conifers.  It almost makes it look like the map is covered with thousands of lances.

In the realm of Pon, southwest of Split Rock Pass and west of Fotress Marzarboi can be found what appears to my eye to be the tallest mountain in the world.  Who or what lives on the mountain?  Has anyone climbed to its summit?  Dig those not-quite-vertical lines on all the mountains, which makes them dark and foreboding while suggesting great height.

The waters running out of Lake Carth and the river known as the Wanderer meet in the heart of the realm of Muetar to form the river Deep.  I don't know about you, but I'm imagining a small mist-shrouded lake fed by a mighty pair of waterfalls.  And what dwells in those two small, unnamed forests? 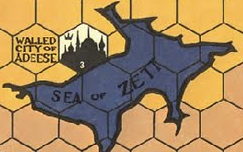 The realm of Shucassam controls all the arable land around the Sea of Zett, most of the south shore is wasteland.  Who lives on that small bit of land controlled bu Shucassam but only accessible by water travel or a trip through the wastes?  I'm guessing semi-independent separatist religious whackos (dervishes?) and/or the exiled survivors of a previous Shucassamite dynasty.

Most of the forests on the Minaria map are depicted as pointy evergreens.  The rest are scrubbly looking, possibly dead or dying, as depicted above.  The Waste of Vah-Ka-Ka has several tiny forests of this twisted vegetation.  Are they the remains of a great forest doomed by desertification?  Or mutant plantlife twisted by radiation?  What fauna lurks among that flora?