Since they came up in the comments on yesterday's post about old Star Wars action figures, I thought I'd talk about the Micronauts briefly today. The Micronauts were a line of action figures and awesome vehicles imported in from Japan starting in 1976. They were slightly smaller than Kenner's 3.75" Star Wars figures, but close enough they could work together.  Here's what the basic figures of the line looked like:

I love, love, love the translucent plastic body/white plastic details/metallic head & chest aesthetic.  It's a rarefied example of the sci-fi look in the days just prior to Star Wars and its "used future" design ethos.  One thing I hate about Micronauts are the dull metallic pins used to hold them together, especially in the shoulders.  I can sort of stand it in GI Joe dudes, but it's just a terrible eyesore on an otherwise beautiful design. 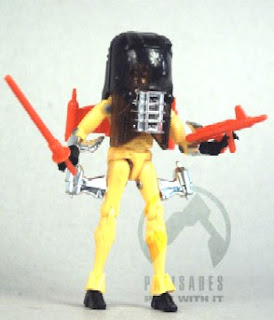 I got this dude ("Galactic Defender") as a kid due to all of the sweet accessories.  That space helmet/jet pack combo is aces.  And anybody who carries both a laser sword and a zap gun is bad ass.  For reasons I don't totally understand, I often used the lightsaber with another figure:

This is the second Snaggletooth design from Kenner, after they figured out that his clothes were red and he was a midget.  As a kid Snaggletooth armed with his little blaster and Galactic Defender's sword was My Go-To Guy.  Every other figure in the scene was a secondary characters in my imaginary adventures prtending to be this little freak with his borrowed space cutlery.  Someone in the social sciences ought to do a study mapping personality types to preferred action figure avatars, but I'm not sure I want to know what playing a little hairy space goblin with a laser phallus really means about me.

Anyway, back to Micronauts.  Here's another fave of mine from back in the day. ﻿ 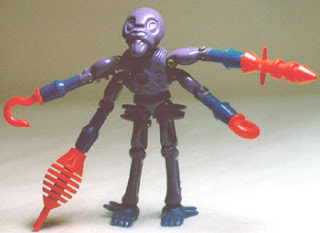 This guy was one of the Micronaut villains.﻿  He's called Antron but as a kid I always insited he was a spider because spiders are obviously cooler than ants.  There's nothing that isn't awesome about this monster.  Four arms?  Check.  Awesome purple color?  Check!  Mutliple bizarre weapons?  Checkity check!  And turn him around and you find his best feature:
﻿ 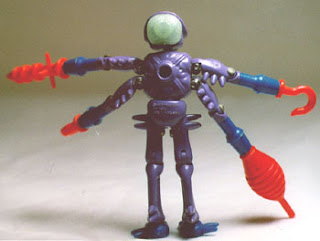 GLOW IN THE DARK BRAIN!!!

I didn't own many Micronauts, but between the awesomeness of Galactic Defender and Antron I didn't need any others.  Serious Micronauts collectors undoubtedly focus a lot of energy on the vehicles of the line, which were definitely neat-o.  Most of the large one﻿s were sufficiently modular that they could be pulled apart and put together in a variety of ways.  Unfortunately, this alos made it easy to lose parts to the toys and as a kid I saw very few complete vehicles, excepting those that had just been opened. 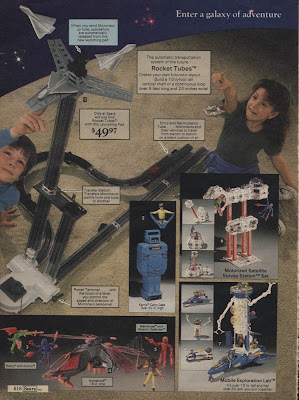 By request, here's page 616 of the same Sears Wishbook I posted pics of yesterday.  Bottom right is one of the cooler Micronauts vehicles, the Mobile Exploration Lab.  For more Micronauts toy goodness, check out innerspaceonline.com.