Two weeks ago the party was victorious in the Unknown Dungeon's annual Chaos Parade. Obviously the next logical thing for them to do would be to go into business as purveyors of pornographic vampire novels.  Click to embiggen the frontispiece of the new bestseller in the Kingdom of Verbosh. 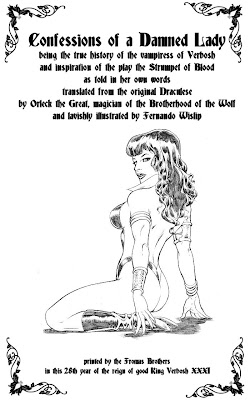 It all started with Our Heroes in dungeon approaching a vampire lair. The key says there's a single vampire with no treasure. Boring. I reach for my favorite oracular die, Big Red. Hey, Big Red, is this one of the vampires the party pissed off last run? 1-3 Yes, 4-6 No. Big Red says yes. Is it Vampirella or one of the two Draculas? 1-2 Vampirella, 4-6 Dracula. Big Red says Vampirella.

So now I've got a sexy vampire babe in an empty room.  Nature abhors a vacuum and I feel the same way about empty dungeon rooms.  I have great trouble leaving well enough alone when the key says no treasure and doesn't list any contents.  So of course I put in a coffin.  And I decide that under the pillow of the coffin is her steamy diary, written in Draculese.  I made up the language based upon the fact that Vampirella is not native to Cinder, but rather an immigrant from planet Draculon (it's a fact, you can look it up).

So the party makes its usual fiasco of opening the door to Vampirella's lair, so she turns to mist and floats up to the ceiling.  No one ever specifically looks up while searching the room and the extra roll I secretly threw on their behalf came up empty.  Vampirella is not amused when Orleck the MU horks her diary into his backpack, but she doesn't immediately attack.  Half the party is waiving around obviously badass magical swords.  The other half of the party is a dire wolf, a grizzly bear and an ape.  Oh and the guy with a chainsaw for a hand is riding the Silver Surfer's board through the dungeon.  A little planning seems to be in order rather than a full out attack.

So she floats just outside of visual range, still in mist form, near the peak of the arched-ceilinged chamber, until the party opens the room of her pet ghoul.  I decide the ghoul next door is a Renfieldesque nerd but also perverted.  I describe/demonstrate how he's hunched over in a corner of the room, sloppily chowing down on some dude's arm and covering his face with blood in the process.  He's wearing a sweater vest, a bow tie and nothing else.  Needless to say they waste little time in icing this freak.  While the party is distracted by this vile wretch Vampirella coalesces into her corporeal form and attacks the rear guard of the party.   That happens to be Orleck the diary thief and his pet bear Sasha.

Two things save the party from energy-draining annihilation at this point.  One is a series of utter crap rolls on my party.  The other is Kelgar the dwarf's magic sword, with which he manages to impale Vampy right through the heart.  But I had a lot of fun chasing Orleck the magic-user and Albert the elf around the dungeon before that happened.  Albert's player seemed particularly terrified of a vampire attack and the elf ran away screaming like a little girl.  I found that hilarious, as Albert was a first level elf with one hit point max.  He probably should scream and run from anything larger than a gnat, but he waits until the sexy lady in the skimpy swimsuit shows up to freak out.

So now the owner of the diary is dispatched and Orleck uses comprehend languages to discover that the contents are rather explicit in detailing the author's dalliances.  So the party decides to go into business.  While Orleck translates the contents into the Common Tongue the rest of the party lines up a print run.  They of course already know some printers, the halfling Chaos Party agitators.  A bookbinder can be located in Verbosh City.  After meeting with the showrunner at the Royal Theater of Verbosh they line up both a saucy illustrator and sell rights to produce a stage version.  Meanwhile the party cleric researches a new spell, a medieval copy protection curse that actually works called copyright plague.  After finishing the translation Orleck researches a variant of continual light he calls continual pillowbook illuminator, which enchants books with their own integral nightlight.  An initial print run of 100 leatherbound, doubly enchanted and lavishly illustrated codices of Confessions of a Damned Lady is ready to go on sale just a few days after the opening performance of Strumpet of Blood.

Our heroes of course get free tickets to opening night.  Sir Roi of Cribbet is invited to sit with his liege King Verbosh XXXI, whose box is in a terrible location because the actual ruler of the realm is a different guy, Lord Hagor.  He just holds onto the family title and a few meager royal rights.  Sir Roi bought his knighthood from him for five bucks, if I remember correctly.  Attendance is brisk opening night and the play is a hit.  The next night the house is packed but that's the last night of the play as the moralistic types in the city convince Lord Hagor to shut it down.  But all 100 books become available for sale the next day and they quickly sell out with enough interest to do a second print run.  They quickly sell through 62 more copies then get out of town, their pockets fat with gold, just before mob justice catches up with them.

And since the book needed an ending, Orleck writes a few additional pages where Vampirella falls madly in love with him.  So now anyone who has seen the play or read the book will probably think twice before messing with him.